In May, I got to go to WisCon again. (Recovering took a while, thus not getting around to posting last month.) There was a lot of great gaming programming, including some very fun and mind-expanding conversations. One thing that kept coming up, though: A whole lot of people invest way too much energy and money into trying to fix D&D. 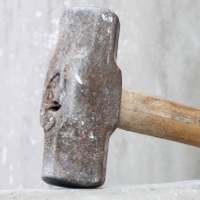 D&D is a very particular game, with very particular assumptions. It works great for a certain slice of play styles, I think. But I get the impression that a lot of people are constantly having to fight the system to get it to work for the play styles they want — play styles that lie nowhere within D&D’s fortes. Can you use D&D to run a system-light, non-violent game that isn’t focused on acquiring things and defeating objectively evil baddies and progressively getting better at fighting bigger, eviler baddies? Yep, for sure! I am firmly of the belief that you can run any game with any system. But that doesn’t mean that it will be easy to do so. You can use D&D for a system-light, non-violent, etc. game, but doing so is like using a sledgehammer to drive a staple. It’s entirely possible to find a way — but why bother, when there are these things called ‘staplers’ out there? And why (to further extend the metaphor) keep spending money to accessorize your sledgehammer for the job?

The main reason, of course, is that a lot of people have never had experience with anything but D&D. But even that isn’t a satisfying answer. The amount of effort a lot of people invest in carefully hand-crafting their sledgehammers into devices capable of driving staples, when they could spend that same amount of energy — or considerably less — finding and learning to use a stapler… it continues to amaze me.

A lot of people also just play D&D because of that closely-related reason, critical mass. Everyone plays D&D because everyone plays D&D. (This way lies a metaphor about social networks, and how D&D is basically the Facebook of RPGs. But enough with hackneyed metaphors.) And there isn’t really a good argument against that, other than “But you could be having so much more fun if you just played a game designed to do what you want to do!”