Imagine that someone wrote a travel guide to the US with the power to shape reality. Whatever the authors write is the way reality is, forever and ever. Imagine that that travel guide was only 50 pages long. The authors try to keep it close to our reality, but still, some corners get filed off. What would the US as created by this travel guide look like? 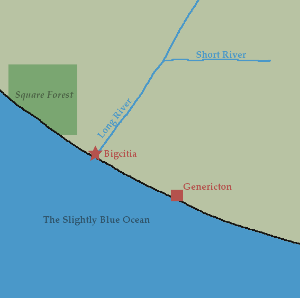 Doesn’t make much sense, right? But — and my metaphor is probably pretty obvious by now — that’s how a lot of game worlds are written and executed. Everything about a place can be reduced to permanent, objective, undisputed, simple facts.

It’s definitely good to have a broad understanding of what places are like. It’s good to lay out general details and then stick to them; this builds consistency. It would be amazingly frustrating to not know from day to day which street you live on, or what number to dial in an emergency, or which direction the Sun would come up from.

But at the same time, it’s good to break from the norm in big or small ways. Have a tiny town be home to the best architect in the kingdom (and come up with a good backstory for why she chose to live there); give a place alternate names, and figure out why it has them; discover that for some reason, a big group of an unexpected minority lives in an unexpected place.

Not only is this fun, it’s a necessity for realism. One of my constant truisms is, “The hallmark of reality is that it is complex”. Pretty much everything in the real world has a fractal level of detail; if something is simple, even on close inspection, that’s a good sign that it doesn’t exist in the real world. Little unexpected details are one of the best ways to show that something is real. (This always reminds me of the ‘commode story’ from the movie Reservoir Dogs — warning: very NSFW!).

To achieve a fractal level of detail, there needs to be a broadly predictable pattern, while still having small details that are surprising and interesting. If you’re the worldbuilder, or the GM, how do you generate small contradictions?

A major way is to get player suggestions. Playing something like Microscope or The Quiet Year always generates a ton of interestingly unexpected details. This is because the worldbuilding is shared out, and because different people are pulling those expectations in different directions. This can also work in a much more traditional game: Ask the players what makes this little village exceptional, or ask one player to come up with a reason why this NPC is unusual for a blacksmith.

Random rolling can work, but this can make it very tempting to do nothing but random rolling. (Drop tables and wandering monster charts are but two examples of this kind of thing.) This quickly tilts the balance from “interestingly unexpected” to “a complete mess that makes players have no idea what’s happening”. So I tend to be pretty cautious about approaching it that way.

My main way: just think of what would exist by the rules, and tweak one element a little. Find a third way.

I’ve also embraced slight mistakes made in play. There’s one town in Calteir that’s named Chaegrae. However, one time when I was telling some players about it, I misremembered and called it “Chaebrae”. This became a little bit of a running joke, but also a bit of linguistic variety: the town had, at some point along the line, acquired another common pronunciation. Canonically, Chaegrae is now frequently called “Chaebrae” by Westerners, due to an ancient misunderstanding. A nice way to harness a poor memory for purposes of worldbuilding!

There’s a whole class of ‘expectations’ that deserve to be contradicted constantly, of course. This is ‘expectations’ that fall fully into the realm of stereotype. Games where the only women are sexy minxes or sexless nuns; settings where non-white ethnicities are turned into orcs or goblins; societies in which trans people simply don’t exist. These are the kind of assumptions that some hail as ‘realistic’, even though the assumptions behind them and worlds they produce are anything but realistic. And of course, not only do these assumptions produce unrealistic worlds, they produce worlds that are pretty awful, too. So there are some ‘expectations’ in worldbuilding that deserve to be contradicted every chance you get.