A current Bundle of Holding is a very nice one. This iteration contains the CityBook series, which has long since been one of my favorite supplements for fantasy RPGs. Each book is a really nice slot-anywhere book of encounters, structured around businesses and other locations one might find in a fantasy city, or in later books, other locations in a fantasy setting. There’s a pretty wide variety of encounter types, and each location has some really nicely described NPCs associated. There are also some nice suggested scenarios for the encounters, some of which are easily full campaigns in themselves. Everything is presented in a way that is actually pretty system-agnostic; NPCs have only two ‘stats’ at most (fighting prowess and magical ability), but have copious background descriptions. The series is one of the neatest things Flying Buffalo has published, in my opinion. 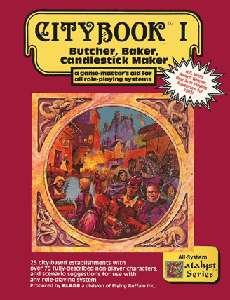 The presentation here is also very nice. The PDFs are clearly scans, but the text for the CityBook series is all selectable, meaning searches for text strings work and things can be copy-and-pasted. The illustrations (many by Liz Danforth) are really nice, too.

The CityBook series makes a nice entry in the fictional nonfiction genre. Each encounter is rich with possibilities, and suggests stories without necessarily forcing a specific narrative.

The series isn’t perfect, of course. Some of the encounters imply almost a bit too much background, making them perhaps difficult to fit into an existing campaign; and the tech level tends a bit more toward the high end of the scale for my taste (there’s a fair amount of renaissance tech implied), which could also make them hard to use in some games. Some of the encounters are clunkers, with stereotyped tropes. But mostly they’re quite good — inventive, inspiring, fun, flavorful.

This Bundle of Holding also contains the Grimtooth’s Traps series, which is fiendishly fun (though if any GM actually tried to use the traps contained within in a game I was actually playing in, I would take it as a good sign that I should walk briskly away). And the fuller collection includes Flying Buffalo’s slightly goofy but kind of nifty modern/pulp action RPG, Mercenaries, Spies and Private Eyes. (The PDF of MSPE doesn’t have searchable text, but the rules are all there, at least.) All in all, a very nice deal for the money.