Another passing thought, inspired by conversation elsenet: When players tend to turn every offhandedly-mentioned NPC into the most important thing, pretty often it’s not because they like latching onto insignificant details and running off to do random things. Instead, it’s often because what seems to the GM like a random thing is, in fact, a pretty important detail in the players’ eyes.

A key question here is what gets reified. Realistically, when you’re playing the game, you have very limited window into the game world. Oftentimes, the GM has a vastly better idea of what’s going on than the players do. A big part of this is by design — it’s often not as fun to know who the murderer is at the beginning of the movie, and not everyone likes to read the last page of a book first. But another big chunk is just that, in many a game, the GM has had to think through a bunch of subtle, complex details about the game world that may never come to light for the players.

There is a strong incentive for GMs to detail everything in the world. If you can’t explain how door hinges work in this culture, whether or not it’s possible to make gauss rifle ammunition from scratch, or how it is that any given FTL drive isn’t also a world-ending kinetic weapon, then the game can crawl to a halt when those questions come up in play. If you don’t know why Ferid the Ever-Hungry is ever-hungry, the players may become hungry for that information. 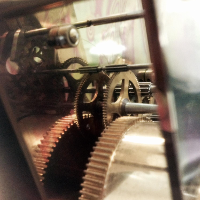 And because the players often know so little of what’s going on, it’s really easy for it to feel like any insight they manage to get into the gears behind the clock face is superbly valuable information. It can get to the point where every trickle of knowledge from the GM is something to be treasured, and clearly something very central to what’s going on.

So when the GM does mention how it seems like the dagger is missing a gem, or gives the greengrocer an interesting backstory, or describes how the sun has a certain glow today, it’s pretty reasonable for the players to latch onto those things as important information.

Is this something to be avoided? I don’t think so, or at least not necessarily. It can conceivably lead to more work for the GM, but only if you consider worldbuilding to be ‘work’. Or it can lead in the other direction, with GMs winging everything and letting the game just play out from the players’ choices. Again, not necessarily a bad thing at all.

The only real problem that comes to mind is when the GM gets actually, seriously disappointed that the players aren’t following ‘the plot’. This often seems to be a form of nerd self-loathing — frustrated authors who really view their players more as beta readers than as equal partners in forming the story, who view gaming as something that’s only valuable if it leads to a publishing deal. If that’s what’s going on, then the problem does not lie with the players, shall we say.

If the players go off on random tangents but everyone has a fun adventure along the way — well, really, that’s no longer a random tangent. That is the adventure.