I haven’t had much time to post here lately. Short version: Real life. And not much gaming as a result. My monthly Blade & Crown game is still going strong, but it’s on hiatus for a couple months due to scheduling issues.

Recently, I got OpenMW running again, and thought I should write a little about it. The game runs very nicely these days. That means that, in short order, I was back to playing my favorite level 37 sneaky archer in Morrowind. Who, unlike in Skyrim, is quite able to fly over mountains.

Morrowind is, of course, a much older game than Skyrim. The graphics aren’t nearly as pretty as Skyrim’s. No flowing waterfalls, no auroras at night. Trees don’t have many leaves; ground cover is just a 2d image of grass; round shields aren’t really round; textures get repetitious after just a short distance; the polygons are pretty obvious everywhere. The sounds are also a lot more basic; most NPCs have no voice recordings, just text interactions.

But other than that, I think I like Morrowind a lot better than Skyrim. One major factor is that not all the NPCs are hostile. In fact, most are pretty friendly. It feels vastly more realistic, and just plain less annoying to play in a world where the NPCs aren’t all either jerks or even actively trying to kill the player character. And in general, it feels like there’s more ways to interact with the NPCs than “kill ’em”. This makes the game feel more realistic, more dynamic, richer, and deeper.

In terms of sheer depth, I think Skyrim and Morrowind are probably about equal. There are hundreds of hours of things to do in either game. But the relative variety in Morrowind — in that not nearly so much consists of “go to X, kill Y” — makes it feel a lot deeper somehow.

Also, the movement is much more freeform in Morrowind. Skyrim, for all its massive amounts of detail, has a lot of railroady bits. Trying to get up mountains, especially, quickly reveals how little of the game you’re actually meant to explore. Morrowind, on the other hand, is pretty much entirely open. With levitation or flight, there really isn’t anywhere in the game that you can’t go.

The default game can feel a bit empty at times. The flat surfaces and only occasional wild animals can make it feel underpopulated, or abandoned.

Also, with the save importer that comes with OpenMW, old game files result in most NPCs being dead. Hrm. Not pleasant.

However, that has given me a new mission: to resurrect all of Morrowind. It’s an odd duty, but an interesting one. And it makes the game feel a bit like the typical CRPG in reverse: rather than going around killing hostile NPCs, I’m bringing them back to life.

Also, with a few mods, the game becomes much prettier and a lot less empty. The default OpenMW water shaders are already better than in original Morrowind: 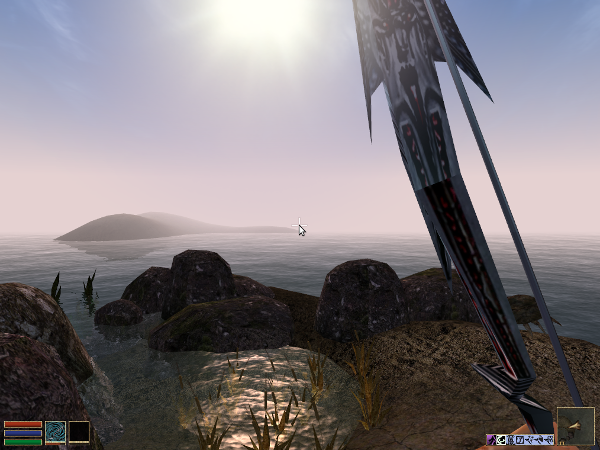 With mods, the surfaces become higher-res: 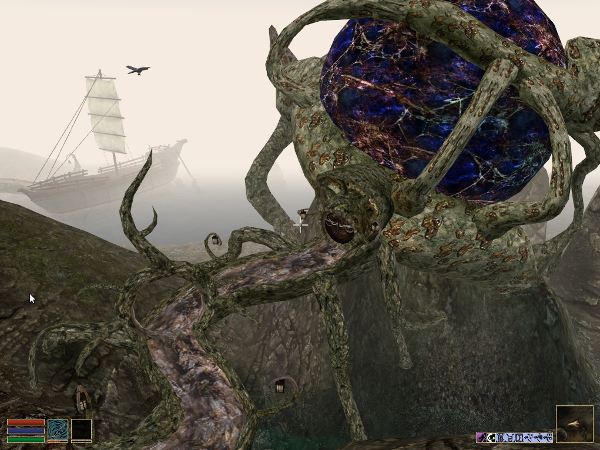 I’ve tried mods to add general wildlife to the game, but they end up slowing it down too much. However, a mod to adds birds works nicely: 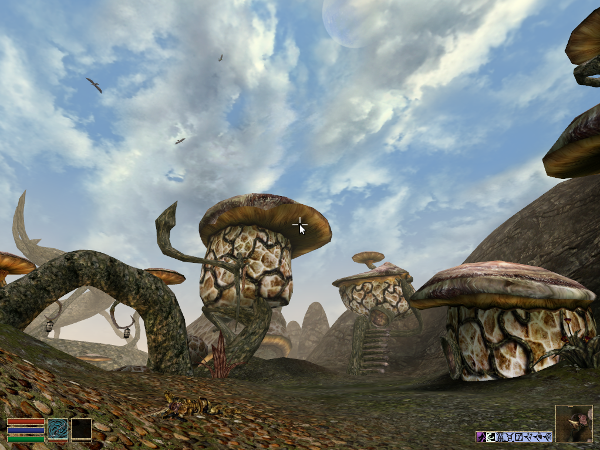 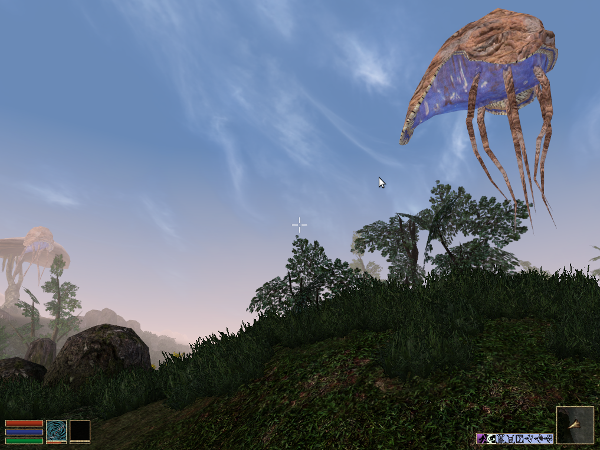 I still consider Morrowind one of my favorite CRPGs (the other being Darklands). The richness of play gets very close to the possibilities in tabletop gaming, and the worldbuilding is quite deep. When tabletop gaming isn’t available, Morrowind does pretty nicely.

There’s a lot I haven’t done yet in Morrowind. How much longer will I be playing it this time around? Not sure, but the game still has a lot to offer, and a lot to ponder. 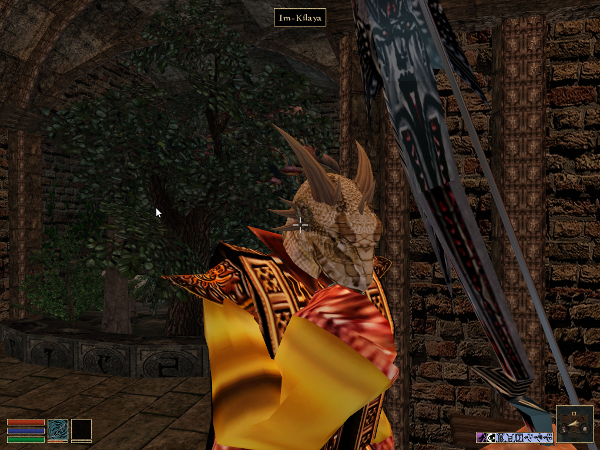