↓
Home Menu ↓
Skip to primary content
Skip to secondary content
Home→Gaming→Skyrim and Back Again; or, my theory of modernity and CRPGs

This past weekend, for various reasons, I felt like playing Elder Scrolls V: Skyrim again. After a long time getting it to update, I was back in the Velothi Mountains and soon exploring Tolvald’s Cave. It was just as pretty as I’d remembered it. I mean, how can you not love scenes like these? 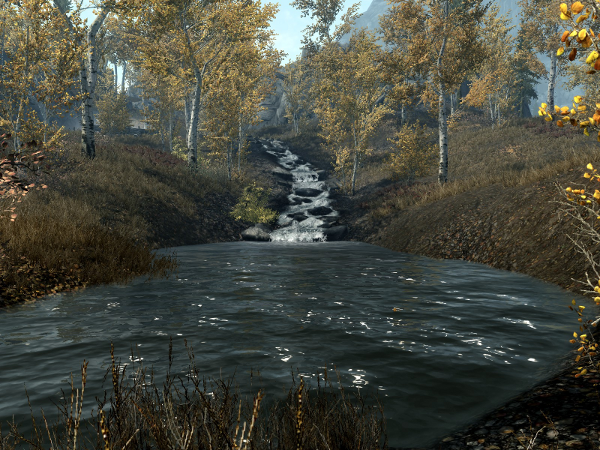 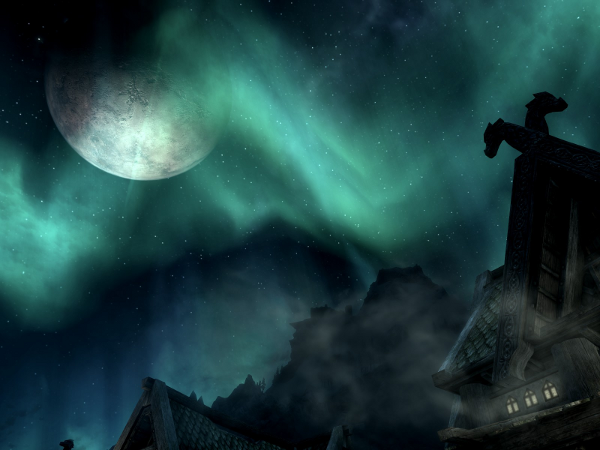 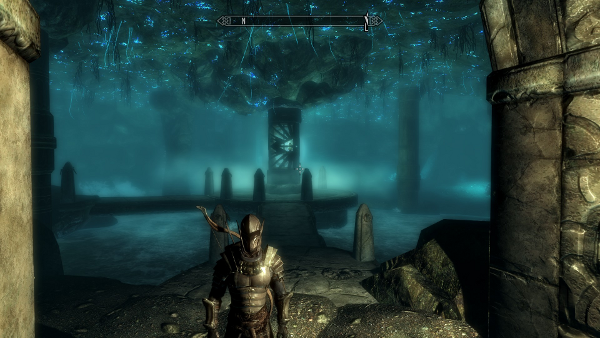 The visuals in Skyrim are still quite amazing, even without a lot of mods or add-ons.

And the level design on display is quite good: there are things going on everywhere in the province, and adventure is rarely more than a minute or two of travel away. The creators clearly had a lot of fun; there are interesting little details all over the place, such as strange bouncing orbs of light that make pleasant chiming sounds and occasionally knock over buckets. 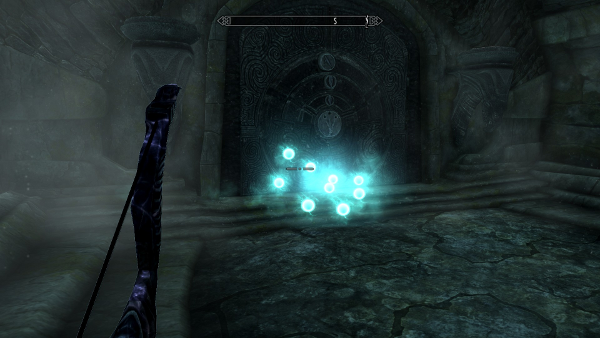 What were they doing there? Why do they chime? Why did they disappear the instant I’d defeated a non-corporeal undead beastie? It’s not explained, just a nice little magical mystery. That detail reminds me a little of Miyazaki Hayao’s movies, where there are interesting, surprising worldbuilding choices around every corner, sometimes left unexplained.

And of course it’s fun to see magic effects in real-time, and to level up (Level 48 sneaky archer, thank you), and to look at the map and see all the places I’ve explored, and all.

Yet playing Skyrim again reminds me of how hollow a CRPG can be. The level design is pretty good; there’s rarely a dull moment, and if there is, it’s because you’re looking at the beautiful scenery. But it feels much more like level design than it does like worldbuilding. There are tons of adventurous things to do, all over the place; mysterious ruins, dangerous caves and civilized outposts are cheek-by-jowl, often separated by only a few dozen yards. It’s the old “why is there a 50′ dragon in a 30′ room, with no source of food?” question, writ large, all over the landscape.

Skyrim feels a bit like I’d expect a world built by a large committee to feel: it’s got a gazillion things going on, tons of different narrative moods, and lots of details that don’t particularly hang together. (It contributes to my recent sense that broader narrative input results in gonzo worlds.) For example, did the Dwemer evolve into the Falmer? Did the Falmer kill the Dwemer? Does someone in charge of game development know the answer? I’ve never seen a definite answer to this question, at least. As the Battlestar Galactica reboot showed us, “the writers don’t have a plan” is not a good substitute for true mystery. Skyrim doesn’t end with a whimper; but its version of sandbox exploration — nine million things to do, relatively few of which have any lasting or overarching significance — means that ‘resolution’ is a difficult concept to even apply.

Those problems aren’t particular to CRPGs, I suppose. It’s entirely possible for a tabletop RPG to be composed of a string of combats with nearly no story or worldbuilding to make it all hang together. Heck, I’ve played in games like that. But a tabletop game allows for character actions to be truly meaningful within the world; in Skyrim and other CRPGs, character actions either adhere to a pre-written script (how many Skyrim players have defeated Alduin in exactly the same way, regardless of character style?) or they have no effect on the world at large. Adventure everywhere can too easily mean that adventure anywhere is meaningless.

Skyrim definitely suffers from problems that CRPGs share — problems not shared by tabletop RPGs. Most important, it (like all computer games so far) lacks true AI. That means that, even when the graphic environment appears in glorious pseudo-3D, the interactions with that world feel 2D or even 1D. NPCs only allow about four or five different possible interactions, rather than the infinite potential ways of interacting in traditional RPGs. If you want to interact in a way that the designers didn’t anticipate, too bad. When human-level AI exists, CRPGs may displace tabletop RPGs; until then, though, that lack of human interaction will make CRPGs ring hollow.

Related to this, conflict resolution in Skyrim is far too often via combat. In fact, with Skyrim, it feels quite often like the designers tried to make every single character in the game loathsome, so the player wouldn’t feel too bad about offing them. It’s extremely rare that a random NPC isn’t hostile; the game rewards an “all weapons blazing” approach to almost all encounters. This is grimdark cranked up to universal awfulness, rather than realistic motivations resulting in occasional desperate measures. (Here, Elder Scrolls III: Morrowind was at least a bit better, with occasional peaceful, non-awful NPCs, sometimes even downright sympathetic ones.)

And there are the interaction problems that electronic games can so often have: it’s impossible to climb a cliff (another thing that Morrowind made fun — levitating sneaky archer FTW), and even if you do, your companion will likely get lost along the way; you occasionally find yourself in a part of the dungeon that was poorly quality-controlled, so you have to reset something to get it all de-glitched, and possibly lose a couple hours’ progress along the way; textures look good, but not perfect, and you can instantly tell which barrels are worth looking into and which aren’t. Sometimes your companion fiercely brandishes a handful of nothing in the shape of a spear; sometimes an apple decides to float in midair. Skyrim skews realistic in its overall tone, but the implementation, like for any CRPG, simply can’t approach the realism implicit in direct human exposition. 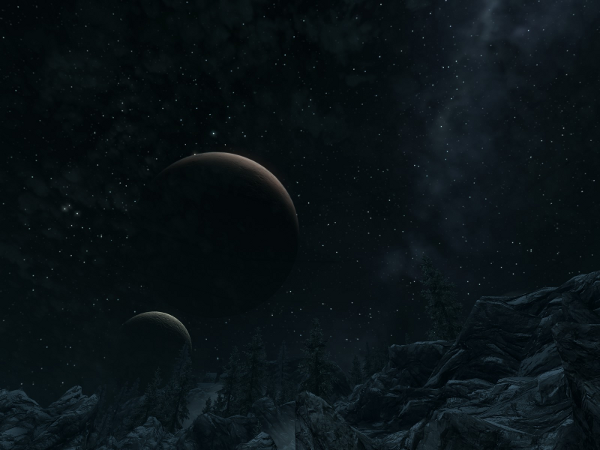 Yet, for all its flaws, the game still has a lot of appeal. Those visuals really are amazing. I wouldn’t say they’re either more or less immersive than tabletop play, just a different kind of immersion. And (at least when it isn’t taking four hours to update itself) the game allows for a pretty immersive environment. The world of Skyrim is fun, mysterious and adventurous to explore. It requires no scheduling with real-world people, and it gives near-constant random stimulation in a very addictive way. It’s possible to play it for just an hour at a time (though part of your brain is going to be wanting more, very soon). So it and other CRPGs have a lot of advantages over traditional RPGs.

In a lot of ways, Skyrim and other games like it are ideally suited for modern life. For someone constantly ‘on the go’, constantly seeking new information stimuli (‘likes’, politics, gossip, texts, whatever), needing to shift gears every few minutes and have five things going on at once, attuned to a world where tension just continually gets cranked up without ever resolving, full to brimming with anxiety (and constantly finding ways to produce new anxiety), substituting cynicism for true understanding, having no time to devote an entire evening to anything (and certainly not anything contingent on anyone else’s social schedule) — for that kind of person, Skyrim is an ideal game. And, I think, modern life trains us all to be that kind of person.

So part of me loves Skyrim. Part of me finds it a poor substitute for traditional RPGs. Part of me is uncomfortable with the fact that games like this have become so popular. Part of me is glad to live in an age where we have access to such amazing technology. And part of me is hankering to play it again.