Mining is the process of extracting ore and gems from within the earth. Sources for gold, silver, copper, iron, etc. within the bounds of civilization have mostly been exhausted long since, so mines tend to be far from other settlements, frequently down very long roads into the woods. 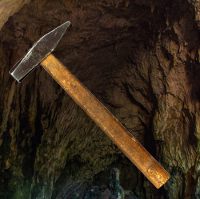 Different cultures have different beliefs about miners, but they tend to center on the notion that miners are secretive, possibly magical, and also possibly nefarious. There is also a lot of folklore connecting miners to the Dwarves; many common folk believe they are one and the same.

In some cultures, it’s actually bad luck to ask a miner what they mine.

Many cultures believe that miners actually produce their ores by working with demons, cajoling dragons or sacrificing human children.

More than one historical feudal lord has attempted to grab control of a mine. There are many stories of greedy lords’ armies being swallowed up by the earth, lost in the woods, killed by Dwarven warriors or worse while trying to conquer a mine.

Mining camps are, as noted above, often quite far beyond the borders of everyday human civilization. The specific locations of mining camps are closely guarded secrets.

While miners often hire mercenaries to guard their convoys, fairly large numbers of miners are paranoid enough that they actually won’t allow the mercenaries into their camps. Some mining roads therefore have standard meeting points. These meeting points will often be marked by carved rocks or decorated trees, as well as occasional bits of ore or even refined metal in the nearby woods.

Because so many miners do not allow mercenaries on site, they often have to provide their own guards. Especially strong miners are sometimes asked to become guards.

Many camps have the ability to smelt ores on site. This means convoys don’t need to haul as much mass, and also means that many common people are unaware of where metals actually come from.

Only the most civilized countries have invented rails. This means that most ore is hauled out of the pits by carts.

Life as a miner can be pretty good. Camps tend to be very isolated; this can be good, or it can be bad. Mining guilds recognize that they need to keep their secrets by keeping the miners happy and content, so life outside the pit can be pretty idyllic: good food, better drink, comfortable quarters, etc. Mining guilds also frequently try to cycle workers between different jobs, to prevent burn-out or grumbling. When well-run, some mining camps can be pretty enjoyable places to work. Some camps are run in very egalitarian ways; some are effectively anarcho-socialist utopias.

But many camps are pretty hellish, and many are poorly run. When conditions are bad, people occasionally flee the camps. Some guilds will just take this as acceptable losses; others may even send out bounty hunters to find the escaped workers.

Miners are notoriously tight-lipped about what they mine. Even when they aren’t protected by superstition, they usually make the locations of their mines as secret as possible, frequently far into the wilderness. They often don’t appreciate the superstitions that surround their profession, but the superstitions help dissuade non-miners from finding or thieving from their mines.

Mine workers are usually sworn to secrecy, with very severe penalties for breaking their oaths. Some mines bring workers into the camps in covered wagons, making it impossible for workers to know where they actually are. Most mines maintain their secrecy through a combination of oaths, guards, wilderness locales and generally decent living conditions.

The shape and size of ingots varies by culture. Morensian ingots, for example, tend to be very shallow domes, because ingots are usually poured into hemispherical molds.

Miners in central areas of Morensia have started to use bowls with central pillars, leading to pierced ingots. This allows the ingots to be tied together and therefore handled with a little more ease.

Miners tend to form into guilds, though the organization and scale of these guilds varies immensely by culture.

There are more than a few ancient, abandoned mines scattered around. Entrances tend to be blocked off, intentionally, with bricks or rocks to prevent nasty spirits from emerging. There are often rumors that abandoned mines still contain veins of gold or caches of gems.

And with that, I’ll have to leave you until July; I’m off on vacation for a couple weeks. And soon after that, Convergence! Busy, busy relaxation. See you again soon!