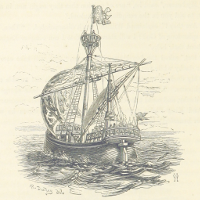 You may know that one of my favorite fantasy RPGs is HârnMaster. I’m not much of a completist, but Hârn is one of the series that I have tried to get a lot of. I ran a long campaign using HM in college (though using my own campaign world), and I played in a campaign for a year or so from 2006 to 2008. That campaign ended less than pleasantly, but it didn’t dim my enthusiasm for Hârn much. So when I saw this on the schedule, I jumped on it. I think I ended up having ticket #1.

Unfortunately, the game left a lot to be desired, in a bunch of different ways. I think it comes down to two major categories: it being a travel game, and it being GM-centric.

What’s wrong with a travel game?

The basic scenario was this: we were all passengers on a ship, plying the sea routes all the way from Tarkain to Golotha and beyond. Wow! If you know your Hârn (and Lythia), you know that’s a huge distance — like, from Tripoli to Dublin. Easily enough for an entire campaign.

And, I think, way too much for a single-session adventure. We were covering entire swathes of continental Lythia in the space of a “make another Piloting roll”.

This is, I think, a fundamental problem for games that involve travel. If the point is the traveling, then the GM has a lot of impetus to keep everyone making speedy progress. But that means that there’s no actual adventure, beyond “you’re in another port, just like the last”.

I’ve been in other games like this, where for some reason our overall purpose seemed to be “see the entire world”. Unfortunately, if your goal is to cover ground speedily, you end up doing and seeing nothing in detail. There’s a Chinese saying that describes this well: 馬上看花 mǎshàng kàn huā, or “viewing flowers from horseback”. You cannot stop and smell the roses when you’re charging through the landscape at a gallop.

Probably the worst example of this kind of travel game I’ve experienced is a Traveller campaign I was in about 10 years ago. At the most boring points, we were breezing through entire star systems with nothing more than “not much to do here”. How is that even possible?! As I’ve said elsewhere, there are interesting things going on even in the smallest town, so for an entire star system to be devoid of adventure seems not only boring in the extreme, but downright impossible.

This HârnMaster game wasn’t quite that bad, but we were breezing through ports — sometimes quite huge cities — with little more than “make another Piloting roll”. Not fun.

I’m still not convinced that a travel game is innately boring. I’ve run The Gift Map, the campaign seed included in Blade & Crown, as a travel game, and I think it went pretty well. And my current B&C campaign also includes a lot of travel. And John’s Diaspora campaign was also basically a “see the universe” kind of campaign.

What I think all three of those games share is, they aren’t focused on getting the PCs through the setting as fast as possible. There’s room for exploring, admiring the landscape, and smelling the flowers. Travel serves as a backdrop for adventure, not as a distraction from adventure.

GM at the center of everything

All the PCs in this game had competing, secret goals. Most of the players were new to the system, and the GM didn’t really explain the system. In one case, he even flagrantly contradicted the rules-as-written. Also, there were about eight of us players.

These factors combined to mean that pretty much all the action flowed through the GM, often on little pieces of paper or in secret conversations. And that was pretty terrible.

There were too many players to build up any real camaraderie. With one player, I literally couldn’t figure out how many characters they were playing. (One? Two? I was never sure. And even worse, I think the player himself didn’t know!) We had too little interaction for it to ever get clarified.

With our secret agendas, we also didn’t know whom among the passengers and crew we could trust. And almost none of us players actually knew each other, so building trust out of character was hard, too.

And finally, with only one GM to funnel all the secret actions through, there wasn’t anyone to help us accomplish any more.

All that meant that for a large part of the game, we were pretty much twiddling our thumbs. There was a lot of sitting around waiting for something to happen, or for the GM to have a free moment.

I think each of us players managed to accomplish something. My character, a priestess of Ilvir, managed to set a bunch of poor, caged ivashu free in Golotha. But what did the other players accomplish? Presumably some of the events in the game were related to their characters, but with all the secrecy and GM-centric-ness, I never did find out what the heck was going on.

It ended up feeling like I was playing a solitaire RPG with a GM who didn’t have enough time to actually interact with me. Perhaps the GM mistook his own busy-ness for everyone actually having a good time.

It didn’t help that there were only two women at the table, out of a group of nine people. We kept getting talked over, ignored, and generally experiencing the kinds of micro-aggressions that men throw our way all too often.

Luckily, the other woman was Kailey, the one who had been in my B&C game, just prior to this one, and whom I was very happy to learn is an RPG gamer. So we took advantage of the large lacunae in the action to chat more about our gaming experiences, life outside of gaming, etc. I’m really glad she was in the game — I think I would’ve ended up leaving otherwise. Our characters ended up working together a little, too.

It was good to experience Hârn again, even if the scenario was less than ideal. And I got to do some interesting things. Mostly, it was good to have some more time to talk with Kailey.