↓
Home Menu ↓
Skip to primary content
Skip to secondary content
Home→Gaming→Con of the North 2015, part 1: Heirs to the Lost World

As noted, I didn’t go to the Con on Friday, so I missed a bunch of great games. The first one I got to be in was this, on Saturday.

It was Chad’s Caravan on the High Plateau scenario. We were all helping an Aztec caravan, carrying cannon and gunpowder, get from the coast to the interior to help the Aztecs lift a siege. A pretty basic caravan escort scenario, right?

But like always, Chad did a great job of setting the scene, and creating memorable characters, and maintaining a good narrative flow. The caravan leader was an incompetent fool; the porters didn’t know what they were doing (“Let’s set up the campfire near the barrels of gunpowder!”); and the high-ranking Aztec priest who clearly knew what he was about was somehow playing second fiddle to the leader. What was going on? We were all quickly engaged in the mystery.

Through intelligent action, we managed to avoid the first ambush Chad had set, but we still had to deal with a big pack of marauding Spanish troops at our camp. (Chad later said that he’d had to improvise a bunch, since we avoided the ambush, but the change was imperceptible to me, in any case.) And once we uncovered the cult who was causing all the mystery, we swept quickly into a final battle, fighting a giant spider demon-god of fire. Can you use cannon fire against a god of fire? None of us were sure — made the battle even more tense.

Chad’s Heirs system did a great job of enhancing the action. Heirs has, as I’ve said elsewhere, the best stunting mechanic I’ve encountered in an RPG. It really encourages players to do over-the-top, cinematic actions that help everyone have a great time. And for second edition, Chad made effort dice all refresh at the same rate, for all PCs. It was a pretty strong hindrance to not have a good refresh in 1st edition, so it’s a welcome change in 2nd.

It also helped that the players did a great job with Chad’s pre-gen PCs. There was an Aztec blood priest who had a natural mistrust with my pochteca merchant (which we eventually overcame); there was a player new to Heirs who had a great time with a jaguar knight, leaping about in jaguar form and taking out mooks; John did a great job with his voudoun priest; and there was a fun, rowdy pirate called Clyde Ankle (“Ye gotta aim fer their ankles!”). There was a fair amount of roleplaying, for what largely consisted of two set-piece combats.

Those stunting mechanics gave us a lot of great cinematic action, such as John’s voudoun priest making his mouth turn into a cannon, and literally shooting off his mouth at the invading Spanish; a rope bridge over a bottomless chasm, which naturally had to get chopped down just as the spider demon was beginning to cross it; and lots of fun with stalactites, crashing down into the spider demon. Everyone contributed to its final defeat. Even my character, basically a merchant, did something, when I and my four porter/guards simultaneously hit a dangling stalactite to cause the spider a bunch of damage. 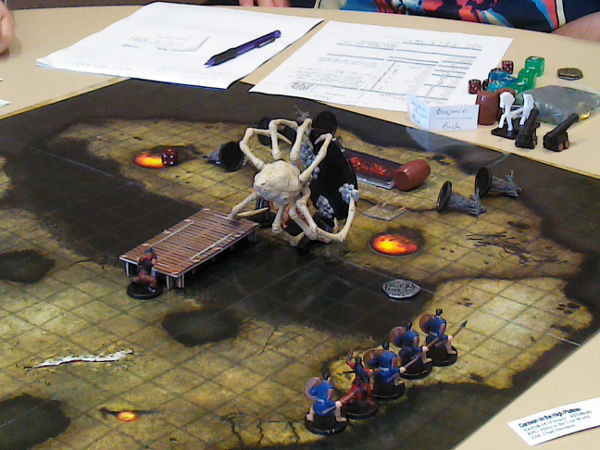 In the end, the big nasty spider demon creature thing fell into the chasm, we delivered the cargo as we’d been charged, and the day was saved.

Echoing John’s report on the game, it’s been too long since I got to play Heirs. I hope it isn’t as long a wait for the next opportunity.