↓
Home Menu ↓
Skip to primary content
Skip to secondary content
Home→Gaming→Snippets from Calteir: The Story of Chakola and Gembrig

Set in a semi-mythical past, Chakola & Gembrig is a traditional play in Morensia. It is considered one of the classic plays of familial tragedy. The author is uncertain. 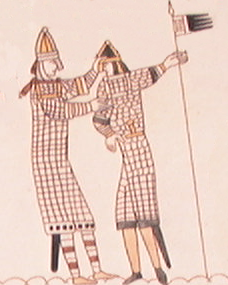 In the play, Gembrig and Chakola are brother and sister. They grow up quite strong and agile; the first scene is traditionally the two of them performing various acrobatic and martial feats to best each other. They join a mercenary company and see the world.

War comes. (In recent performances, this has been the Morensian Interregnum.) There is a great battle. Chakola and Gembrig’s units are split. They end up thinking the other is dead.

Months later, Chakola’s unit continues to fight as a mercenary band. Gembrig’s unit, having sworn loyalty to a lord who lost, has turned to banditry to support itself. Chakola’s fellow troops call her the Golden Sun, for her shining prowess on the field. Gembrig’s call him the Castle, for his unswerving loyalty.

There is a fierce forest battle, where forest spirits cause confusion. Chakola ends up killing Terjad, and Gembrig kills Terjada. In a scene with the two troops’ camps, on opposite sides of the stage, the sister and brother swear vengeance on the unknown killers of their lovers: “This Sun shall set!” “This Castle shall fall!” The two sides rest for the night.

In the morning, there is another great battle. The two sides slaughter each other in horrible but very entertaining ways. (This is traditionally done with a mix of amazing acrobatics and seeming gore, using red streamers and the like.)

In the end, out of the confusion, two implacable helmeted foes face each other: the Castle and the Sun. In the end, the Sun strikes down the Castle, only to find that she, too, has been dealt a mortal blow. She removes her helmet, and the Castle’s helmet, and discovers the horrible truth.

One of the dead soldiers stands up and says “Let us, the spirits of the dead, remind you: tearing down your enemy’s Castle may tear out your own heart. The setting of every Sun may come at the cost of eternal night.”

This story is almost always performed as a stage play. It is sometimes recited, but it was apparently created with the stage in mind.

The story occupies a place in Morensian society similar to that of Romeo & Juliet, or the Legend of the White Snake.