A month or so ago, I had a chance to play Timeline, the inventions edition. I had some frustrations with it, but overall liked it a lot, so when I went to Rogue Robot and saw Timeline on the shelf, I bought a copy. 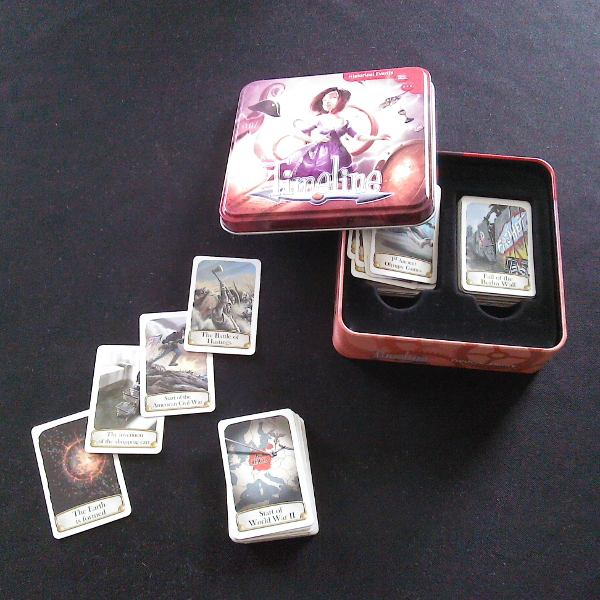 Timeline is a very simple card game about history. Players take turns putting cards down, guessing whether they happened before or after what’s already been played. Was the crowning of Charlemagne before or after the Battle of Hastings? Which came first, the Grand Canal of China or the Great Wall? Was the shopping cart invented before or after the beginning of World War I? That sort of thing.

As play progresses, the timeline of cards gets more and more dense, and the decisions get harder and harder. It ramps up very naturally and elegantly.

There are, as I mentioned, some frustrations. Almost all of them are because the game’s definitions of some historical events seem a little wonky. For example, when was the start of the Cold War? I’d say the Yalta Conference, but I could see an argument for the end of WWII, the dropping of the first nuke or the Berlin Airlift. Yet every card in the game has a single, solitary, definitive year listed. Distilling history down to single, defined dates necessarily involves some simplification, and sometimes oversimplification.

Another example: in the Inventions edition of the game, there’s a card that says simply “Uranus”. Presumably this means the discovery of it, rather than, say, its formation out of the solar system’s protoplanetary disk. Even so, Uranus was never “invented”! The game kind of resembles Trivial Pursuit, in that it’s as much about figuring out what definitions the card-writers are operating under as it is about knowing the facts.

Still, though, it’s a very good, fast card game. It makes a great filler for when you’re uncertain what to play next. It takes about 30 seconds to figure out how to play it, and a complete game of Timeline can easily take only about 15 minutes.

The game as written recommends a sort of “sudden death” round in the event of a tie, where all players who put down their last card on the same round keep going until someone messes up. But the game is simple enough that this isn’t the only way to play it. I mostly play where simultaneous wins are possible. This both gets rid of the player elimination, makes the game less competitive, and makes it shorter.

There seems to be a little bit of strategy (in addition to paying attention in history class): hoard your really easy cards (“the beginning of the universe”, “death of the dinosaurs”) until the end.

I can already see that the game doesn’t have a huge amount of replay value — after playing only a few sessions, I’m already starting to memorize when the first hot air balloon flight was and when (they say) the Cold War started. Good reason to buy more editions, and mix them together. But that’s not replay value of the original game, just adding supplements.

Still, for about US$15, it’s quite a fun little game, with a good amount of replay value, and it makes a nice, portable, quick, easy-to-learn filler game.