About a month ago, I was going through Duluth again, so I stopped at another well-known FLGS: Rogue Robot. 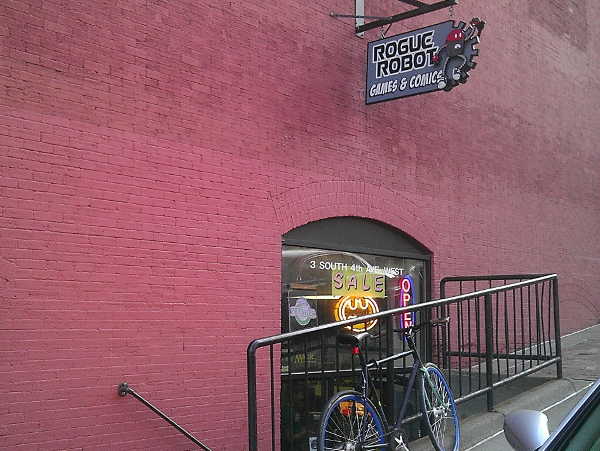 Don’t let the basement location fool you. Rogue Robot is quite a large space, with multiple rooms. The store is connected via back hallways to the other offices in the building. The restrooms are also on this hallway.

Rogue Robot sells a wide and deep range of things. They have a good selection of comics, including tons of back issues; a decent selection of RPGs; lots of minis; a big selection of boardgames; and tons of HeroClix. I don’t think I’ve ever seen that much HeroClix on sale in one place.

They have a fairly huge gaming room in the back. In terms of total area, I think it’s about equal to the Source’s back gaming area — plenty of room for multiple minis games, a bunch of boardgames, some RPGs and card games all to go on at the same time. They also have a large selection of minis scenery on the shelves. The temperatures here seemed fairly high on the day I visited, but maybe that’s an aberration.

Near this gaming area, they had lockers. Is this a Duluth thing? I’ve never seen lockers in Twin Cities FLGSs, but now both the stores I’ve been to in Duluth have them.

As I breezed through, I bought a copy of the card game Timeline (more on that in a later post), a few dice (they had some nice d12s, good for use with Blade & Crown) and a pop. Rogue Robot has the usual snacks on sale, a fridge of pop, etc.

The woman working behind the counter hit just the right level of customer service: friendly, open to helping without being obnoxious, etc.

Rogue Robot doesn’t seem as huge or as RPG-focused as Dungeons End, and parking wasn’t quite as convenient. But it seems like a pretty good FLGS nonetheless.