One of my favorite panels of the con, this was Saturday afternoon:

Terra Incognita: The Role of Maps in SF&F Literature

A discussion of maps used in speculative fiction, either as endpieces or as part of the story. What are good (and bad) examples of maps of imaginary worlds? Can the inclusion of maps create problems? What can maps tell us of the modes of transportation, natural setting, and politics of the realm? Are maps for modern fantasy novels too modern (i.e. accurate)?

I’d wanted to be on it, lover of maps that I am, but it didn’t work out. Also, I tried to record it, but discovered too late that the app I was using had no way to output a sound file. Yuck! Unfortunately, that means I wasn’t taking notes as well as I’d like, so my memory of the panel is a bit fuzzy. 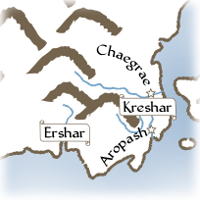 Panels about maps and mapping, in my experience, tend to carry one of two primary messages:

In case it’s not clear, I thoroughly disapprove of message #1. Too many people seem to think that the sole purpose of fandom is to cast off all geeky things and become a Published Author of Prose Fiction, and to wallow in geek self-loathing as part of that, and to dis maps as a result.

Luckily, this panel was of the second variety. Marissa Lingen remarked about this early in the panel. As she said, she’d been on a similar panel recently where the panelists had mostly agreed that maps are bad (useless, a distraction, unprofessional or something of that nature — I didn’t catch exactly how she described it). She found it remarkable that everyone on this panel was so pro-map. (Not that she’s anti-map; she just found the contrast interesting.) It was very refreshing.

The panelists discussed the uses and misuses of maps in a quite evenhanded way. One major purpose they identified for maps was just evoking a feeling. This is certainly true! When I look at a map, I can quickly be drawn into the experience that it represents: Ooh, why does Yrkalia control this little section of the mainland, even though it’s clearly based around the Semelt Valley? What must it be like to travel the Jade Road from Semelt to Cherus? How did the border forts of Cherus evolve? A well-constructed map will tell you a huge amount of information about the setting and draw you in. Of course, a poorly-constructed map can conceal or obfuscate things that it shouldn’t, but that’s more a matter of quality of execution than anything innate to maps themselves.

Another major use is for the person viewing the map (reader, player, or author) to orient themself. If you’re describing where Semelt is in relation to the cities of the Jade Road, it can be really confusing to keep three or four different locations straight in your head. If the specific orientation doesn’t matter, that’s fine; but if the orientation is an important part of what’s happening, using prose only is a disservice to all concerned. I remember reading Downbelow Station by C. J. Cherryh and being thankful many times for the station diagrams at the beginning of the book; I would’ve been quite confused without them. And the same goes for the maps in the Middle Earth books, and the map in The Name of the Rose for that matter. And while I was reading Against a Dark Background, I ended up drawing the Thrial system for myself, because I needed a map to keep it all straight. (Iain Banks was a great author, but his descriptions of location often confuse me.)

Of course, it’s possible for a map to be an unnecessary distraction, geek self-loathing aside. If the movement of the story doesn’t actually require a map, there’s no particular need for one. If the characters themselves are disoriented, it can be counter-immersive to present a detailed map. Eleanor Arnason noted here that, in Woman of the Iron People, she deliberately used a map that is completely useless — it gives no location names, and doesn’t really help the reader orient themselves at all. I laughed out loud at this. While reading the book, I’ve frequently found myself saying “Why is this map here? Is this a Daoist map?”

A large part of the panel’s time was devoted to the ways in which maps can help authors keep a story oriented, and make sure the worldbuilding makes sense. This is of course huge. If you give the characters a carefree journey down the river from Semelt to Cherus, but later on you state that the river is controlled by the evil Lord Brocos, a map could help prevent that kind of inconsistency.

Maps can backfire, too. As the panel noted, you might state that it takes three days to get from Semelt to Cherus by horseback, only to have your audience check your map and notice that the two places are only five miles apart. Your map has then caused you some trouble — though it’s perhaps arguable that your worldbuilding is where the fault actually lies, and the map has just revealed an underlying problem.

And using a map to achieve consistency and believability requires some basic geographic knowledge, regardless of who’s using it. Ruth Berman described a story she’d seen in which two characters valiantly go over a waterfall… while going upstream, away from the coast. D’oh!

The panel went into a lot of other fun topics, and I found myself alternately laughing at the humor and marveling at the insight. I wish my recording had worked; I could relay even more cool stuff. But in case, it was a great panel.