↓
Home Menu ↓
Skip to primary content
Skip to secondary content
Home→Gaming→Minicon 49, part 2: The State of Art in the Gaming Industry

After “Fandom or Fandoms”, I had a choice between two panels that both looked pretty good: “Navigating The World Of Small Press Publishing” or “The State of Art in the Gaming Industry”.

How does an author break into the world of small press publishing? What benefits do small publishers offer? What should new authors be wary of?

The State of Art in Gaming

What is art’s impact on content, style, jobs/work opportunities now and into the future of the gaming industry? What is up now in the gaming art world, and what is just around the corner? From a player’s perspective, how does art influence a game?

Which one to go for? Both seemed right up my alley, hopefully covering various aspects of being a small-time publisher, which I am. Discussing art and artists for games sounded very interesting, but “Small Press Publishing” made mention of Kickstarter, which I’ve been trying to wrap my brain around lately. So I tried that one first.

Unfortunately, that panel turned out to assume everyone wants to publish prose fiction — novels, and to a lesser extent, short stories. Not at all what I wanted.

Why is this assumption — that all fans should aspire to becoming published authors of prose fiction — so prevalent? Why is “publishing” taken to automatically mean publishing novels and short stories? Why is that the default? Not necessarily everyone wants or should want to publish things; and those who want to publish things certainly don’t all want to publish prose fiction. Nor should they! It’s such a wrong assumption in so many ways, yet so much of fannish discourse seems to revolve around it. Blech.

So anyway, I got out of that panel as soon as I realized how skewed its emphasis was, then headed for “State of Art in Gaming”.

I’m glad I did; it turned out to be quite a good panel. It covered many aspects of art in games, from how art direction works to how art helps instill mood in a game. The art direction segments were a highlight, with discussion of how (bigger) publishers sometimes ask artists to create very particular things, or sometimes request something vague (‘there has to be a sword’ or whatever). They related one example of a magic card where Daniel Dos Santos (I think it was) did an illustration for a Magic: the Gathering card, and the illustration didn’t work — but Wizards liked the illustration so much that they created a new card based around it.

I asked a question about one of the most difficult topics for small publishers: how do we get art that a) we can afford yet b) doesn’t ask artists to sell their work too cheaply?

She also said that some artists may truly get into a publisher’s project for the long haul. Yet there’s a weird space between desire to do the work and desire to get paid. If they’re in it for the long haul, too, that seems to assume a relatively large publisher, and a project that will eventually become a huge success — increasingly unlikely in an ever-more-fractured and ever-more-niche market, I think. And, I think, it’s not ethical to lean on artists’ passion for their work in an attempt to get cheap art.

This was obviously something I struggled with in publishing Blade & Crown. I could’ve tried to entice up-and-coming artists with promises of “exposure”, but that’s both BS and immoral. I could’ve waited even longer to publish it while I got up the funds for better art, I could’ve used the same stock art so many other publishers have paid for… Or I could’ve done what I did, which was publishing with a mix of hopefully-obscure-yet-effective public domain art and my own illustrations.

She also mentioned how Kickstarter can help small publishers pay a decent amount for art. And the panel discussed Kickstarter in general: how it’s changed the game publishing industry, making possible smaller, riskier projects that weren’t possible before. And how it allows publishers to get a sense of the demand for a product, and how it acts as a combination of insurance and market survey. I wish they had discussed the actual process of creating a Kickstarter more — as I said, this has been much on my mind of late — but that probably wasn’t exactly on track. 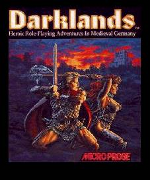 At one point, the panel was discussing art in computer games, and Lindsay talked a bit about Darklands and its gorgeous illustrations and glorious isometric combat maps. (Interesting that there’s been so much in my life about Darklands recently — I may have to fire it up again sometime in the near future.) I mentioned how the cover art had gone on sale a year ago, and we geeked out about Darklands a bit. It’s relatively rare to meet someone who’s even heard of Darklands, much less an enthusiastic proponent of it, so that was a nice addition to a panel that was already great.

Apparently, back in the “Small Press Publishing” panel, there was some discussion of art & artists that went… um… badly. I don’t know enough solid details to go into it more; I’ll just say that I’m doubly glad I went to “State of Art in Gaming”.