Recently I re-watched Ladyhawke for the umpteenth time. It’s always been one of my favorite fantasy movies, but this time, I watched it with a specific eye towards gaming. What ideas could I get from it for gaming? How easy would it be to reproduce that kind of scenario in a game? (If, in fact, it’s even possible or desirable to reproduce — RPGs are a very different artform from movies, after all.) 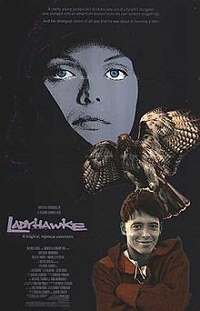 In case you don’t remember it: A thief, Philippe, escapes from the Bishop of Aquila’s dungeons. Since no one has ever done this before, the Bishop demands that the thief be found and executed, so his men go out in search of Philippe. The thief stays one step ahead of the Bishop’s troops until they finally catch him — but he is rescued by Etienne of Navarre, a mysterious knight in black who keeps a hawk with him. Etienne dispatches the Bishop’s men handily, then Philippe and Etienne form an unlikely symbiosis: Philippe seems to offer Etienne a way into Aquila to seek revenge, while Etienne offers Philippe protection from the Bishop’s men. But what about the hawk?

Philippe eventually finds out that the hawk is in reality a woman, Isabeau, who is Etienne’s estranged love. During the day, she turns into a hawk. At night, Etienne turns into a wolf. The two have been cursed by the Bishop, who was jealous of their love. Now, they are always together but always apart.

The next day, the Bishop’s men attack and Isabeau is struck by a crossbow bolt. Etienne commands Philippe to take her to a nearby abandoned monastery, where an old monk lives. The monk, Imperius, sees to her wounds and reveals that he was the one who (through drunkenness) revealed to the Bishop that Etienne and Isabeau were in love. For this, Imperius feels he owes them a tremendous debt.

But he has a plan: there will soon come a “day without a night, a night without a day” where Isabeau and Etienne can confront the Bishop and unravel his curse. First, though, they’ll all need to sneak into Aquila…

Other than those questions, though, everything else in the story fits together really well. Philippe appearing gives Etienne just the sign he’s been looking for; Navarre was once the captain of the guard, so the guards let him past; how the whole “day without a night” thing works; how Philippe’s thieving skills get used — if this were an RPG, I’d commend the GM on making sure that everyone (well, except Isabeau) gets to contribute something important to the plot, and on making it all fit together so neatly.

It’s tempting to think that the film was designed to ride the wave of D&D-inspired fantasy. The main characters map pretty closely to standard fantasy classes, for example. Etienne is clearly a warrior (perhaps a paladin); Imperius is a priest; and Philippe is one of the better depictions of a thief I’ve seen in a movie. He’s arguably the main character, since he’s the only one who has much of a character arc, and since we effectively see the other characters through his eyes.

Watching the film again reminds me of so many of its set-pieces that make good gaming fodder. The great locations, for a start:

And the movie has some very inspirational items:

A few other generally nifty things:

All in all, a great movie, with lots of good gaming fodder. It’s easy to imagine trying for a similar scenario in an RPG. Perhaps a reversal, where Isabeau gets to rescue Etienne and Philippa the thief gets to help her along the way. Or where we learn how the gems in the sword of Navarre were earned.