My next post for the Dollar Store Dungeons project is a three-for-one. Three items that, once I saw them, I knew I’d need to use together. 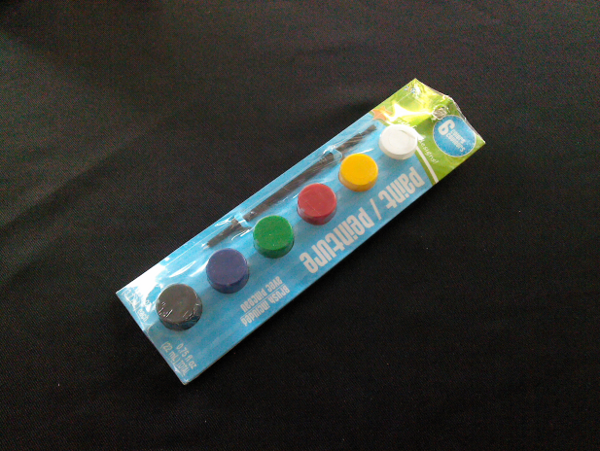 The first part of this mini-project is paint. For $1, I wasn’t expecting very high quality stuff. That’s about what I got: just six pots, with not much range of color. The package gives no further information about the paint than just saying “Paint”, but it seems to be acrylic. Seems, because it turns out that several of the pots were completely dried up, forming a gooey plastic-y substance. And they seem to be water-soluble. I’ve left a small amount of water in the pots. Hopefully, they’ll transmogrify from rubbery goo back into paint overnight. (Update, a day later: the red seems to be slowly remembering that it was once paint, but the yellow is still a piece of rubbery plastic. Hopefully more soaking will help.)

The paint came with a very cheap but serviceable brush. And the black paint seemed to work pretty well as dab-able goo. Also, the paint doesn’t seem the slightest bit stinky.

If I had a spare lifetime or two, one of the hobbies I’d get (back) into is painting miniatures. One great advantage of my Lego minifigs is that they’re almost instantly ready for play — no painting required. But still, it’s nice to be able to paint minis exactly as you want them. And to put in the time and effort creating a work of customized art. Sometimes I like to check out Carmen’s Fun Painty Time or Cool Mini or Not or other cool miniatures galleries. And then I realize that I will never have time to be that good, or even really to get into minis, and I go do something else. As I said, a hobby I wish I had the time for.

The next part of this mini-project: a basic selection of five brushes, with very low-quality bristles. But still, they work well enough for dabbing on gooey paint, which is all I need them for. 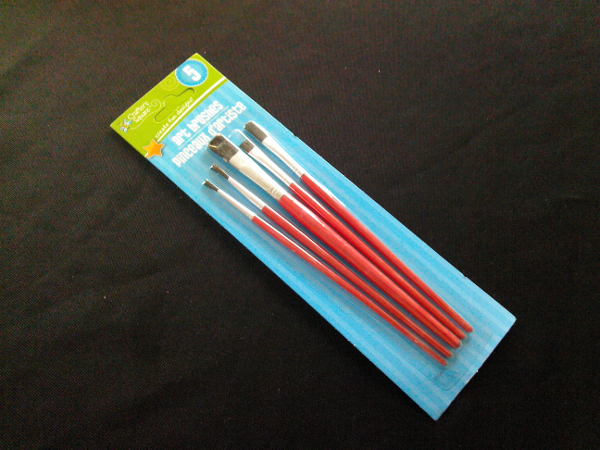 What do I intend to use these paints and brushes for? Well, probably not for painting minis, at least not anytime soon. I actually have a large box of 11th-century Normans that I inherited, and I do dream of painting those up someday. These paints are not right for that job, however; there’s nothing metallic in the lot, and I get the impression that trying to mix a decent variety of colors would be far more trouble than it’s worth. I suppose I could use these paints for touching up (or perhaps roughing up) some of my Lego minifigs, but that seems mostly unnecessary.

So what plans do I have for these paints?

The last item in the mini-project. These were a great find, and are what inspired me to buy the paints and brushes. How, you may ask, can I use dominoes in gaming? 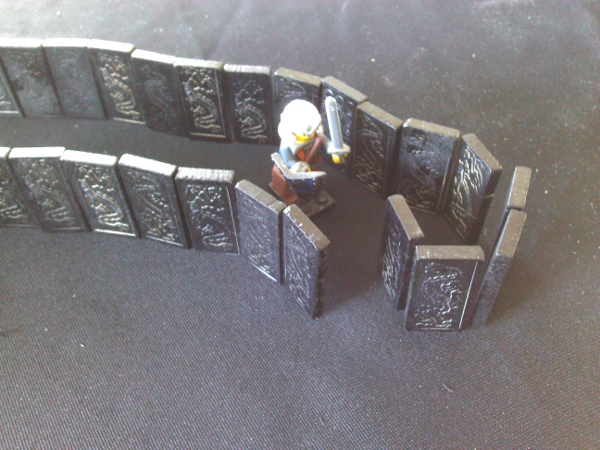 They can make great stand-ins for dungeons walls, walls of an inn… even a table or tree in a pinch. Pile them up and they make a cairn or dais. Pile up enough and they can even serve as altitude markers for an aerial combat. They’re generic enough to serve as lots of different things. They give enough dimension to suggest verticality — which lines on a battlemat don’t — but they are also vastly cheaper than the cheapest purpose-made gaming terrain.

Dominoes really have only three problems, as I see it:

The first problem is easily taken care of: just set them up in landscape orientation instead. This doesn’t suggest full-height walls, of course, but it has the additional benefit of allowing easier access to the minis. And now the occasional doors look more like doors. 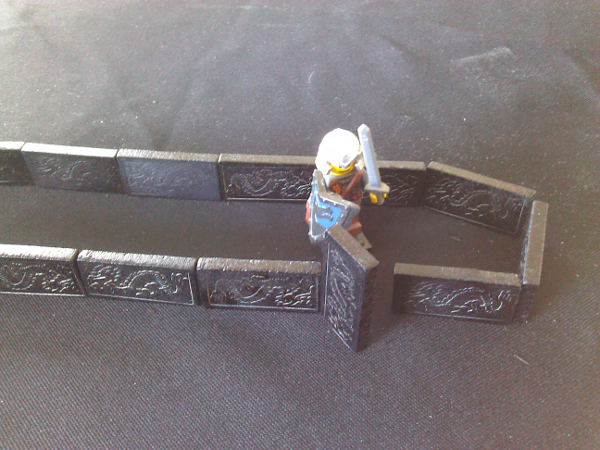 As for the second and third problems… well, you’re probably starting to see where I’m going with all the paint supplies, right? Dominoes + paint + brushes = nice, blank, black tiles. Ready to be used as castle palisades, a sarcophagus, gates to the Imperial City or a raft for going down the river.

As with some of the other items in this project, I kinda cheated and bought two sets of dominoes instead of just one. A whole $2! For which I got 56 dominoes, and two nice wooden storage boxes to put them in. If it turns out that I can’t make a serviceable brown or grey from the paints, I may have to splurge on some better paints to create wood or stone effects. Hm, perhaps I should go back to the dollar store and look for some cheap spray paint!