If you need miniatures for gaming, there are a lot of options out there. Metal or plastic minis; tokens or counters; cardboard standups. One of my favorite solutions, though, is Lego minifigs.

They’re a bit too cute and cartoony, and their proportions aren’t realistic. They cost about the same amount as gaming-specific minis. They aren’t totally stable, so they fall over easily without proper basing. And there are probably fewer total minifigs available than there are purpose-built minis for gaming.

Beyond that, though, they’re just generally great. They stand about the same height as 25mm figures, so they work fine on just about anything scaled for 25mm. There’s a good variety of minis available, at least, and it’s growing all the time; seems like Lego comes out with a new fantasy–themed line every few years, and they have many other themes: SF, superheroes, pirates, steampunk, 1920s, modern, ninjas, etc. 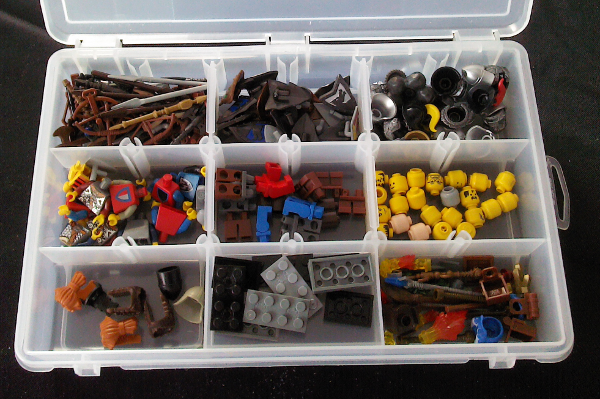 My Lego parts for fantasy gaming

One of their best features is that they allow for vast customization. There are all kinds of accessories, including computers, briefcases, clothing and armor, rope, etc. There are tons of different kinds of weapons and shields (even before you count third-party makers of Lego weapons). They even have a quite good approximation of a certain valuable idol. You can easily customize an entire new minifig from the body parts available there, and it’s easy to mix different torsos, heads and legs.

In fact, the customizability is so good it’s almost a liability. Presented with such vast possibilities, players want to spend a good long time looking for just the right torso or satchel. And many times, when I pull out the minifigs for the first time, the players’ eyes go wide: it’s often been a long time since they’ve played with Lego, and getting to do it again, they go wild. I’ve fairly often had to impose a time limit on customization: “Five minutes and you go with what you’ve got”!

As I mentioned, another slight liability is that the minifigs tend to fall over when standing on their small feet. Luckily, that’s easy to solve; I just keep a large quantity of 2×3 base plates on hand. (See examples of 2×3 base plates in the photo below.) I plant each mini on one of these base plates, and the figure then stands quite stably, at least if its leg joints are strong.

Pre-assembled minifigs and other accessories in tray

The other trick to using Lego minifigs is keeping them organized. So far, the best system I’ve found is keeping them in several trays, like the ones in my photos. I usually keep two types of trays with me: one of just parts, one of largely pre-assembled minifigs (for NPCs and players’ long-term PC minifigs). It works pretty well.