This Thursday, Real Life intervened again and we were short a player. Had been hoping to finish our playtest of The Bandit Map, the Blade & Crown scenario I’m playtesting. Instead, we played a game that one of the players bought at GenCon: The Quiet Year.

It’s a small, interesting game. (Small? Literally. It comes as a tiny pamphlet and pack of playing card-like cards.) In it, the group works together to draw a map of a community that has survived conflict with the Jackals. What exactly the Jackals are is left up to the players. The community has one year, one Quiet Year, before the coming of the Frost Shepherds. The identity of the Frost Shepherds is also left up to the players.

The centerpiece of play is a map that everyone draws together. It can denote physical locations — a water filtration plant or ancient ruin — or more figurative objects such as a spiritual inquiry. The map gives the game a feel of being a boardgame, though it’s definitely a story game. With the various projects going on and the detailed sense of history, the game also seems strongly reminiscent of games such as Advanced Civilization. The map works in interesting ways; I could tell you what all the symbols on our map mean, but they might be meaningless to you. As with other RPGs, the map is for the people playing it, while they’re playing. 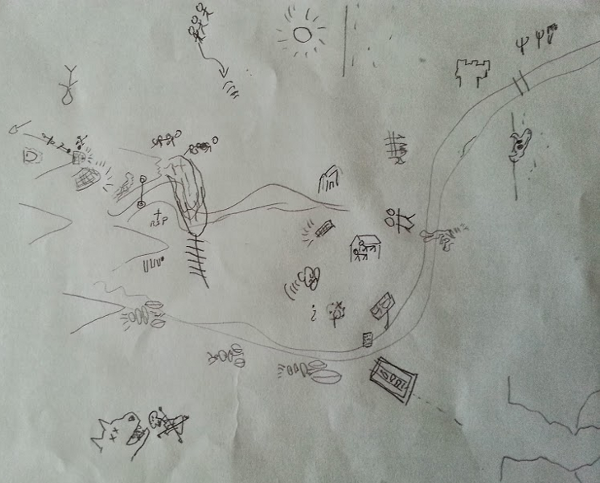 John has a great review up at the Everwayan. He notes a few things about the game we all found interesting; foremost for me is how Discussions work. They are one of the three actions a player can take at the end of their turn (the other two being Discovering Something New, or Starting a New Project). Discussions serve to get issues into the open, but — much to our amused realization — those discussions don’t actually resolve anything. To make actual progress, someone needs to discover something or start a project. Contempt (which is a direct mechanic in the game) may grow when people’s opinions are given short shrift in Discussions. It’s an interesting simulation of how communities work.

I was a little at a loss for how Discussions are supposed to work, however. Each player voices an opinion, and if the person who started the Discussion began with a question, they get to voice the last opinion. However, it was unclear a) how roles in the community are doled out, and thus which sides we should take in Discussions, and b) how exactly Contempt is supposed to be meted out. The rules say points of Contempt can be eliminated to heal over arguments, but the mechanics on this are a little unclear. Thus, it doesn’t seem like there’s much reason to take points of Contempt. And especially here in Minnesota, openly declaring Contempt is a difficult thing to do.

It might be interesting to see a mechanic where players decide at some point (perhaps as denoted by the cards, or by some use of the Contempt tokens) which factions they represent. One of us might be the stodgy council of elders, another might be the youthful rebels. Of course, it’d be important for this to be open to change — another possible use for the Contempt tokens: “The Council of Elders is so full of rage that it splits, and a new faction emerges, the Old Progressives”. This would give players a bit more structure to hang Discussions on, and allow for more integration of Contempt tokens.

Of course, the point may have been that Contempt does nothing, only serving to increase tension in a community without resolving anything. And that would be a good point!