This is an example religion for Blade & Crown, taken from my campaign world Calteir.

Scattered in small communities throughout the Archipelago, including Sashtia and Morensia, there are people who practice the Erethane religion. The Erethanes believe that there are three basic principles in the world: the Dark, the Light and the Grey: 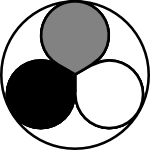 One version of the Erethane holy symbol

Erethane holy symbols are three circles touching in the middle. Particularly elaborate symbols have silver for the Dark, gold for the Light and lapis lazuli for the Grey. The principles are personified as an inhumanly tall person wearing all white robes, including a veil over the face, but with a black sash; an impossibly tall person wearing all black, including a veil, but holding a lantern out of which hints of light can be seen; and a person of normal height holding a book.

The Erethane religion is heavily based on songs, many of which are quite elaborate. Important times in the Erethane religion are almost always accompanied by singing. Many people consider sound itself to be the means by which the Balance is achieved.

There are historical hints that the Erethanes were once followers of Karyath, but they are only hints. There are Erethane holy sites scattered throughout the Archipelago and older lands. Some are in quite dangerous locations now.