My favorite type are the 20+, which are 20-siders with 0-9 twice; half the numbers have a little “+” symbol next to them. This makes the dice really easy to use as both 20-siders and as 10-siders. You might say “why not just use a twenty-sider marked 1-20 as a ten-sider?” I’d respond that it takes just that fraction of a second longer to interpret, say, a 17 as a 7. “Fine,” you say, “then why not just use regular ten-siders?” Because they don’t have the spherical, solid feel of icosahedrons. Naturally, it just comes down to personal preference — and those are mine. 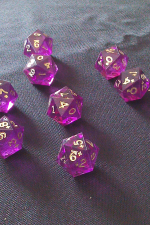 Blade & Crown, as you may know, mostly uses ten-siders. For many years, I’ve used non-GameScience ten-siders, because those were what I had. But this past year, I finally admitted to myself what my dream dice were: translucent, purple, inked, 20+. I did some checking and found that Gamestation sells GameScience dice in “tanzanite”, which was supposed to be a darker purple than the “amethyst” color. I already had some GameScience dice in amethyst, so tanzanite sounded enticing. And, I discovered, Gamestation sells the dice inked! Must mean hand-inking, which is kind of amazing, but it’d work better than crayon or whiteout. I didn’t see any 20+ dice in that color on their website, but they were the only site advertising tanzanite — in fact, the only place where I’ve ever heard tanzanite mentioned. Gamestation had 20+ in other colors and they had inked dice, so why not try? I wrote them an email and asked if there was such a thing as inked 20+ tanzanite dice. 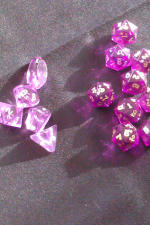 James Means wrote back very quickly, checked the stock and said there were, indeed, tanzanite, inked 20+ dice. I first got a quote for six dice, then decided on eight (about the most you ever need in a B&C roll), and when I asked for eight, James gave me free shipping! Wow, that’s good customer service.

I got the dice with gold ink, which doesn’t quite go with the purple as well as I thought it would; if I could do it again, I’d have gotten white ink. Also, it turns out that tanzanite isn’t as dark or as indigo as I’d hoped — I already had a tanzanite die in my collection and hadn’t realized it.

But overall, I’m very satisfied, and I now have all the 20+ dice I could need. (Although, of course, ‘need’ and ‘desire’ are two different things.)