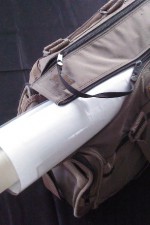 Dozens of pounds, hundreds of uses

Whenever I GM, and fairly often when I don’t, I lug this thing with me. It’s a gym bag, Oleg Cassini I think, that I acquired for free somewhere along the line. It’s just about the right size. It usually contains:

I plan to detail each of those items more later on, but this post is focusing on the bag as a whole.

It’s really nice to have all my GMing materials in one place. If combat breaks out and we decide to use a map, it’s good to have all those supplies at the ready. If someone wants to see the town they’re in, I pull out the laminated map; no squinting at tiny type in a book or on a screen. And for cons, it’s great to gradually accumulate materials in the bag — “ah, I need a map of the bandit caves! I’ll add that to the bag next” — and it’s great to have everything in one place, prepped and ready to go.

With all that stuff in it, the bag almost weighs more than I can comfortably carry. Heading to the monthly group (where I exclusively GM), I often have to slip a Subway sandwich under the carrying handles to have any way to carry it. When I bring my netbook and its accessories in addition (as I always do, these days), the load gets pretty cumbersome.

I’ve thought about what I could comfortably remove from the gaming bag. Minis? I don’t use them all that often, but when I need them, I need them. Extra copies of the rules? I could probably take out one copy, and in fact I think I will; the players usually only want one reference copy from me, and one player brings his own copy. But even removing one book wouldn’t lighten the load that much.

The thing that weighs the most is the three-ring binder. It’s got tons of notes, ideas, sketches, lists and references. Most of that stuff is contained in my netbook’s wiki, so I rarely even open the binder up. But again, when I need it, I need it.

Do I use everything in my gaming bag? No. Not every time, certainly. In the weekly group, when I’ve occasionally GMed Og of late, all I need is a copy of the rules and a few index cards. But when I’m GMing Blade & Crown, with all the complexity happening there, the contents of my gaming bag come in handy more often than you might think. The gaming bag’s purpose isn’t to get used every time; it’s more about being prepared for anything.