This is a good time to be thinking about remote gaming. The current pandemic is awful, of course. But we’re lucky in that good internet, videochat, etc. allow us to connect remotely with such ease. 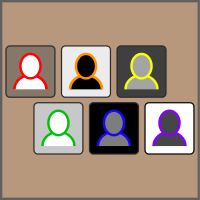 Most of my gaming these days is done remotely. I’ve blogged about some before. Videochat systems leave a lot to be desired, but really, they’re quite good.

There isn’t much reason an entire con couldn’t be run online. I mean, by some analysis, web forums, social media communities, etc. already are online cons. But for something closer to in-person cons, with the same depth of personal interaction, the technology is almost there. The videochat systems I’ve tried wouldn’t be great for doing panels, but they’d be serviceable; other methods — streaming like Twitch or some of the virtual meeting systems out there — would probably work better. Some gaming doesn’t work well online. This is especially clear where physical interaction between players is required, such as passing paper, counters, tokens, etc. Other forms of gaming work just as well, or better, though. No reason an online con couldn’t include some mutual MMORPG raids, or something like that. Costume contests, virtual raves, art contests, dealers’ rooms, readings… There’s a lot that should translate quite easily to online formats. I would miss getting to hang out in the consuite together, but a lot of cons don’t practice great hygiene even in the best of times. There really isn’t much we would need to miss in a virtual con. I’ve heard some third-hand reports of full cons done online, but I haven’t seen enough of them to link with any certainty. I’ll leave that as an exercise for the reader.

A specific thing to think about: There are lots of issues to overcome with videochat. Folks have to get used to not talking over each other, and sometimes needing to ask for clarification. While videochat boosts accessibility in some ways, it lessens it in other ways: bad audio quality can be very difficult for people who have hearing difficulties, for example. Privacy and trolling are also issues. To make a whole con work, I think there would need to be some way to guarantee that only con ‘attendees’ could access the virtual rooms. I don’t know of a way to prevent attendees from recording things that they shouldn’t. Chat moderators would become extremely important in a virtual con. It seems like a virtual con would necessarily require spending money on a professional virtual meeting service, or setting up a dedicated server for something like Jitsi, and thus still needing to spend the money on bandwidth — either way, it would take money. Though, I suspect, it would cost far less than running an in-person con.

I’m sure there are other things I haven’t thought of. But still, it must be completely possible to make virtual cons happen. If we aren’t already, we should get working on that.