The call for submissions to Con of the North has come and gone. For a long time, it has been my main gaming con. I like most things about it, but it has its little problems. And now it’s kind of a moot point, because it looks almost certain at this point that I’ll be on the other side of the planet when Con of the North happens. For that and other reasons, I’ve been thinking recently about starting a gaming con from scratch.

That naturally prompts the thought, what would I want such a con to be like? A realistic goal, of course, might just be “a bunch of people in a room for an afternoon or day, having fun gaming with each other”. But it’s also interesting to think about loftier goals. If I could organize an ideal gaming con, what would it be like?

So what is the right size?

The more I think about this, the more thoughts I have, and the longer this article gets. So I should break these up into chunks that are a better size. And that’s the first topic to talk about with gaming cons: size. 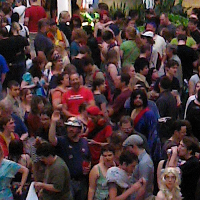 Luckily, Con of the North is not like this.

This is one thing I like a lot about Con of the North. The con gets a few hundred people every year, which feels just right. In the past few years, the hotel has also felt just about the right size.

I feel like there’s something of a minimum critical mass for a gaming con; smaller than that, and it can be hard to get a good variety of games going. (Small cons, like relaxacons or even just big game parties, can be great; but a big part of why I want to go to a con is to play things I ordinarily don’t get to, and if it’s just me and my friends playing the same games we usually play, it doesn’t feel like a gaming con per se.) Con of the North is comfortably above that minimum. The variety of games isn’t always perfect for my tastes, but I don’t think any con can offer everyone precisely the games they want. At a huge con that has everything,

it always seems like there are other problems that get in the way.

Yes, but three of them are overlapping, they’re in four different hotels, and they all finish after the shuttle buses stop.

Importantly, Con of the North is also not too big. It fits very comfortably into one hotel, for example. Some games are a little hard to find, and some of the the current hotel fittings seem to be designed for summoning hounds of Tindalos. However, it’s all one complex. There’s no need to trek outdoors to get from one game to the next — an important consideration, in frigid February Minnesota conditions, but also just nice any time of year, anywhere. Everything is close enough together that you can peek into the LAN room on your way to the dealers’ room, or check out the minis on display while heading to your group’s theme room. Some cons in the Twin Cities are near to bursting their buildings. Luckily, Con of the North is not one of those.

It seems that an assumption for attending a lot of the big gaming and other conventions is that either a) getting from one activity to the next will require sweating and walking long distances, or b) you will basically just camp out in one area (dealers, restaurant, the Settlers of Catan suite, whatever) and not leave it for most of a day. Not only for GMs or minis gamers or completists or whoever else with a lot of stuff to schlep, but also for people with mobility difficulties, and just tight schedules, having a con spread out across a huge complex makes big parts of it un-fun or downright inaccessible.

There are a lot of other considerations about the venue, but I’ll leave that for a later post.