↓
Home Menu ↓
Skip to primary content
Skip to secondary content
Home→Gaming→Con of the North, part 1: Among Stars and Would-be Gods

Friday, I got to the Con late as usual. I was hoping to get there in mid-afternoon, but several minor crises meant the first game I could actually play started at 6pm. Even more unfortunate, John had had to cancel his attendance at the con entirely for Friday, so my first choice of game (John’s Feng Shui 2 game) had been canceled, too. I wasn’t sure what to play, but Jay of Saturday Night Space Opera invited me to Jennifer Doll’s “Among Stars and Would-be Gods”. I’m glad he did.

The game had a full slate of players, and at first, I was a little leery — Jennifer and I were the only women. Also, I was a little leery of playing a system I hadn’t tried before, and creating a character in it. But Jennifer included a bunch of nicely-designed packages she had created, so creating a PC was largely a matter of putting together a few pieces. She gave us a nice introduction to the system. Cypher seems needlessly complicated to me (seems like the difficulty targets or resource pools or something could be adjusted to avoid all the multiplication that’s required), but Jennifer’s game turned out to be great.

We were all psychic adepts, trained from birth as assassins, enforcers or spies. One player created a tech/leader type who believed he was the leader of the group, but who actually wasn’t; another created a surfer dude-type who was actually an intrusion expert; another created a big bruiser/enforcer type; and there were a couple others. The players did very nice jobs of roleplaying, adding a lot to the immersion and enjoyment. And it was a group who understands that no one person should dominate the spotlight, which is very nice. 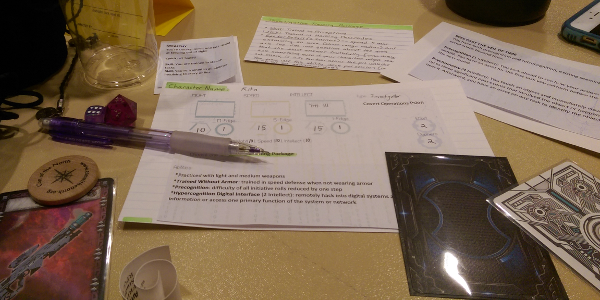 Our PCs were all living in a small compound that we had never been outside of. Shades of La Femme Nikita, or Paranoia, or maybe Logan’s Run. We knew there had to be a world outside, but we’d never been there. When our handlers disappeared, leaving only the minder robots and our other psychic adept comrades, we were moved to action.

As we eventually discovered, perhaps a stronger parallel was with Akira: a group of psychically gifted people trying to deal with someone even more gifted — dangerously so. Pretty soon after we left the compound, I figured out the general course of where things were going, so I had my character start wishing kind thoughts towards Omega, the dangerously gifted one.

Although the scenario clearly could’ve ended with a violent confrontation between us and Omega, we managed to find a non-violent way to resolve it. There was nicely rising tension throughout, so it didn’t feel like a letdown. The bruiser/enforcer PC never got to shoot anything, though, I think.

Like I said, I wasn’t a huge fan of the system — Cypher includes too much multiplication and division on the fly for my tastes. And it seems like the designers could’ve just tweaked some of the difficulty ratings or resource pools to eliminate the need for arithmetic. But the resource management aspect (using pools of points for each of the three characteristics) was kind of neat.

Overall, though, Jennifer ran a great scenario, one with a lot of nice, subtle hints and important opportunities for player agency. The other players at the table also made it a lot of fun. I’m glad Jay invited me, and glad Jennifer ran it.