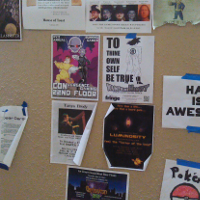 Convergence 2015 is over. Was some two days ago, actually. But the combination of being 13 hours away from CST, then coming right back into Convergence, is still messing with me. I’m starting to get back into the flow of things, but posts here are going to take a while. I still have a bunch of WisCon to talk about, and then at least one more post about Taiwan, before I even get to Convergence.

Short form, though: Convergence 2015 was overall pretty good. The con was crowded again, meaning it was harder to just run into folks I wanted to hang out with. And there were a bunch of little things that annoyed me, from geek self-loathing/nerd social hierarchies being performed all too frequently, to various microaggressive expressions of privilege. I didn’t manage to get in any actual gaming, I think; the usual folks I would’ve played a game with weren’t around, and the Artemis sign-up sheets filled up very quickly. But, as I said, it was overall good. There were some amazing costumes. There was wonderful fan squee a-plenty. A lot of the panels were quite good; I hope to write some of them up here, eventually. It was good to see the folks I did manage to meet up with. Overall, it’s just fun to be surrounded by that kind of fannish energy, of people enjoying their cool geeky hobbies together, and of mostly not harshing each other’s squee.