Snippets of poetry from the Imperium; a sample folk tale from the Oral History; brief biographies of over a dozen Duncan Idahos; two differing approaches to Paul Muad’Dib himself and to his son, Leto II; Fremen recipes; Fremen history; secrets of the Bene Gesserit; the songs of Gurney Halleck — these are just some of the treasures found when an earthmover fell into the God Emperor’s no-room at Dar-es-Balat, and are now included in The Dune Encyclopedia.

So begins one of my favorite examples of fictional nonfiction: The Dune Encyclopedia. 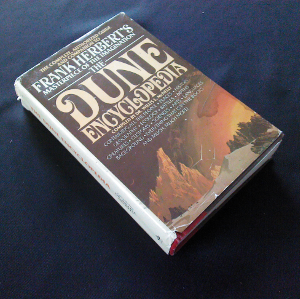 When I discovered this book in the high school library, I proceeded to serially check it out for months. I think I ended up checking it out for a full year, or close anyway. It’s well-presented, as a thorough encyclopedia with articles about history, linguistics, monetary policy, music and much more. Pretty much every named entity in Herbert’s books, as of 1983, is described in detail — often considerably more than was available anywhere else in 1983 (and, thus, often with a great deal more embroidery than Herbert himself had done). Articles include plenty of “see also”, making the whole thing like a wonderful expository choose-your-own-adventure work.

The Encyclopedia never had much official status in the Dune canon, I think. The official website for the new novels by Brian Herbert and Kevin J. Anderson stated:

THE DUNE ENCYCLOPEDIA reflects an alternate “DUNE universe” which did not necessarily represent the “canon” created by Frank Herbert. Frank Herbert’s son, Brian Herbert, writing with Kevin J. Anderson, IS continuing to establish the canon of the DUNE universe. This is being done with the full approval of the owner of the DUNE copyright, the Herbert Limited Partnership.

I don’t think its canonicity was ever particularly strong to begin with, though; after all, Herbert himself said in the foreword,

As the first “Dune fan,” I give this encyclopedia my delighted approval, although I hold my own counsel on some of the issues still to be explored as the Chronicles unfold.

Still (or perhaps because of this), it’s a pretty amazing work: 525 pages, hundreds of articles, vast amounts of speculation and filling-in of the details of Frank Herbert’s Dune universe. There’s a tantalizing in-world bibliography at the end, listing such works as Memoirs of a Sietch Woman, A History of the Fremen Language, “Recombinant Research in the Tleilax Tradition” and Pre-Guild Stories for Children. The almost hidden list of authors at the very end — I’d never actually noticed it until now — includes 40-odd names, implying that it was a large project; Dr. McNelly was truly the compiler, not the sole author. 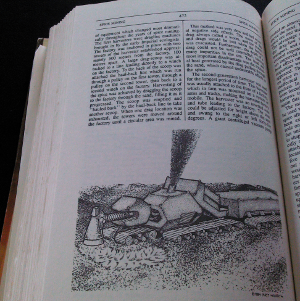 The Encyclopedia has also got some superb illustrations by Matt Howarth and other artists. Interestingly (and frustratingly), it’s hard to tell who exactly the other illustrators are; while Howarth signed his full name to his work, all the other illustrations are signed either with just “Walters”, an unreadable cursive name, or nothing at all. I can find no list of artists in the book.

Part of what makes it hard to tell who’s responsible for what is that the book was written pretty thoroughly from an in-world perspective. The Introduction, quoted at the beginning of this article, is credited to one Hadi Benotto, writing in 15540 AG. The article on the Rakis Finds is kind of amazing; it describes the finding of the God Emperor’s no-room, containing vast amounts of books (on Ridulian crystals), and the great amount of information suddenly accessible within, leading to the creation of the Encyclopedia itself. The in-world origin of the Encyclopedia reminds me of the ‘story’ of Borges’ “Tlön, Uqbar, Orbis Tertius”; the layout of the Imperial library reminds me of Borges’ “Library of Babel”. Both very apposite allusions.

It’s interesting how that in-world perspective changes the feel of the work. It adds a whole layer of flavor to the worldbuilding. Rather than getting an objective stance on Dune, we’re seeing it through the eyes of people who are, themselves, trying to interpret events long after the history itself. (Remember that the events of Dune supposedly happen in about 10191 AG, or about 5000 years before the Encyclopedia is written.) We don’t get the objective truth on all the mysteries of Paul’s life, or Paul II’s life; instead, we get people long after the fact speculating based on their own limited information at hand. So the mysteries feel all that much more mysterious.

It also does a lot to increase immersion. Lacking that artificially objective vantage point, it helps us see the information presented from an in-world perspective. The concerns of the Dune universe aren’t presented at a remove; for the authors of the Encyclopedia, they’re real, pressing, interesting concerns. In an interesting way, the fictional author’s concern with the material helps make it all the more compelling.

All in all, a thoroughly fascinating piece of fictional nonfiction — perhaps one of the best.

The Dune Encyclopedia is periodically available on Amazon or Abe for nearly-reasonable amounts. Or maybe you can just check it out from the high school library for a few months.

Another long delay since the last post; it’s been another extraordinarily busy week.