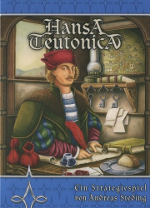 Quite soon after Ace of Aces ended, I got into a game of Hansa Teutonica. I’d actually just played my first game of it a week before, and liked it. Hansa Teutonica is a game of building trade routes in late medieval Germany. Like a lot of German games, it has a fair amount of fiddly bits and some very interesting mechanics. Unlike a lot of German games, the mechanics have a good amount to do with the flavor. There are barely any random elements, and the amount of player interaction varies interestingly depending on how much interaction the players want — it can be really placid, or it can be really cutthroat. The production values are wonderful; the board, in particular, reminds me of Eric Hotz‘ work on the poetic maps for Hârn.

The person explaining the rules did perhaps a better job than the person who explained the rules to me the first time; among other things, the Con of the North teacher preserved something of the flavor of the game, which is important to my enjoyment. The two people varied a fair bit on their interpretations of the rules, and in particular of the scoring. Having looked at the rules myself, it looks like they weren’t translated all that well from German, and that they were fairly complex to begin with.

Nonetheless, it was a good amount of fun. The other players seemed pretty into it, and I certainly had a good time. We ended up with a wide split in scores; two players were separated by only a point in the lead, two players were very close for last place and I was in the middle, with a dozen or so points on either side.

This was my only boardgame of the weekend, and nearly my only non-RPG. There were a lot of good RPGs on offer this year.