↓
Home Menu ↓
Skip to primary content
Skip to secondary content
Home→Gaming→Con of the North 2013, part I: Ace of Aces

I got to the con later than I’d hoped, Friday afternoon. Lots of games were already in progress. I found my friend Alan, and we chatted a bit; he’d already been at the con for a few hours. He’d earlier been in the scheduled Ace of Aces game. I actually had a ticket for that event, but didn’t get to the con in time to use it. But I did have my own set of Ace of Aces with me, so Alan and I played a quick game. 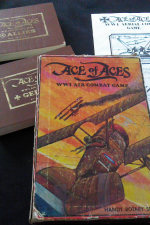 Do you know Ace of Aces? It’s a pretty innovative system for WWI aerial combat. Both players (and it’s by far most suited for two — I’ve never played it any other way) get a book with 223 pages. Each page is a different position relative to the other combatant: far away and off to the rear left, medium distance and parallel, and the dread page 20: close up, facing each other head on — and shooting at each other. There’s an amazing combination of maneuvers where you and your opponent both choose courses simultaneously, then reveal simultaneously and figure out where you end up relative to each other. The basic game is totally diceless and you can finish a session in a few minutes.

I’ve often described it as an air combat computer game without the computers. It’s even possible to play it long distance in realtime with someone else, by phone. The game comes with intermediate and advanced rules, and I’ve often thought of playing a game using them, but there never seems to be interest. Anyway, Ace of Aces is overall just a nifty game, and one that has stood the test of time.

The original Ace of Aces gave rise to a slew of expansions, and other similar games covering a variety of milieu: Lost Worlds simulates person-to-person fantasy combat, and there are variants for WWII, an old west shootout and even Star Wars.

The game has been out of print for a long time, but last year there was a Kickstarter by Flying Buffalo’s Rick Loomis to reprint the Handy Rotary series (that is, the original two books that started the whole thing). According to Flying Buffalo’s website, the reprints should be available very soon — by the end of March or possibly sooner.

As Alan and I played, several people walking by commented “I used to have that game!” or “I used to love that game”. And we only played for about fifteen minutes. Ace of Aces has a lot of nostalgia value for a lot of people — but there’s no reason not to just play it, if you own it.