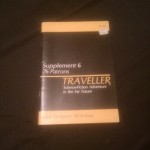 One of my favorite GM aids is from the black book version of the Traveller RPG. It is Supplement 6: 76 Patrons.

It presents 76 different patron encounters, each with a variety of different possible twists. The patrons are organized by number of players — there’s even a section for single-player scenarios — and many assume that the PCs have a starship.

Each patron is essentially an adventure seed, with minimal background or direction given to the GM. Some imply a fair amount of additional work: maps, NPC stats, detailing further webs of relationships, etc. But others could probably be dropped into any appropriate session with no prep by the GM, especially if you’re good at improvising details.

The players are contacted by Tristam Shabie, a merchant who seeks a group of trustworthy people to act as a bodyguard while he makes a tour of the subsector…

The supplement isn’t without problems. Most seem to assume that the PCs are of the amoral wandering thug type. (In fantasy, this is sometimes termed the “murderhobo”; the equivalent for SF settings, as I’ve heard it, is the “space asshole”.) That’s clearly not suited to every group; if your group isn’t going to be up for random jobs from mysterious strangers in a starport, you’re not going to get much out of this supplement. And too many of the missions are of the “break into X and steal Y” type. There isn’t very much variety there.

Also, the ratio of men patrons to women patrons is annoyingly high. On a quick count, I found only 10 patrons who are women, vs. about 36 that are identified as men (with the rest either being groups or ambiguous). And one man is described as “effete”. I prefer more gender equality in my games.

Each patron is presented with a matrix of possible complications. It’s intended that the GM will roll for complications on 1D6. Most of the time, a result of 1 means that all is as presented: the patron has told the truth, the reward is as promised, the mission goes as planned. Other rolls will give different results: the patron has lied about who they really are, or the opposition is stronger than expected, or the stakes are generally higher than planned, or whatever.

These complications are where the supplement’s real promise shows through, I think. The idea that a single encounter could turn out in such radically different ways was pretty mind-blowing for me when I first read it, in the early 80s. The idea of having a branching tree of semi-planned, interesting complications for each encounter was a big deal. I’ve tended to plan that way ever since: every encounter I present my players with can go different ways, depending on what hooks they bite on and what they leave by the wayside.

A problem for the 76 Patrons complications is that they tend towards two extremes: either everything is as the patron said, and the mission goes by the numbers, or the patron has screwed the PCs over and the mission is far harder than they bargained for. While those two possibilities can be fun occasionally, I tend to think that encounters should each have a wide variety of possible complications, each of which is an interesting twist. And only a few should ever result in bland, by-the-book resolution or impossible odds.

But the overall concept of complications and patrons and encounter seeds is a good one. I love how each kernel of an idea can blossom into so many interesting paths. 76 Patrons is still a great inspiration to me.

With those considerations in mind, I plan to start an occasional series of encounters suitable for different genres, and with a variety of branching possibilities for each. Watch this space.