Why does Traveller’s Imperium have a Scout Service?

This is a question that has bothered me for a long time. The Imperium, in its most common iteration, is more than a thousand years old. There isn’t a star system that hasn’t been visited dozens of times. Yet for some reason, the Imperium has a major government agency dedicated to exploring and figuring out what’s out there. When, logically, they should know everything that’s out there already. Long since.

Over the course of centuries, things will change, of course. Planets will get hit by comets; stars will go nova; planetary nebulae will grow and distort; etc. But realistically, the amount of change that will occur doesn’t require anything like a huge, sector-spanning government agency with probably thousands of starships and tens of thousands of workers. Think about how much exploration and discovery we’ve done while almost entirely bound to the Earth over the past century: We’ve mapped a large fraction of the stars in our galaxy, we’ve discovered thousands of exo-planets, we’ve imaged a black hole in a galaxy half a hundred million lightyears away! And much of that in just the past few decades. How much more could we discover if we had centuries at this level of technology? Today, our best radio telescopes are limited to about 13,000km in maximum baseline. Imagine if that was several orders of magnitude better! It’s hard to believe that the Imperium doesn’t already know everything there is to know, at least in terms of what a Scout Service would be tasked with.

Assuming that humanity continues on into the future (and that’s a big assumption), there will always be a need for updates about things that change more on human timescales: politics, economics, culture, natural disasters, etc. But that’s not the job for a Scout Service — that’s a job for journalists, and researchers.

Of course, the real answer to the question of why the Imperium has a Scout Service is: Because it’s cool. And because the Imperium isn’t meant to be realistic; it’s meant to be a fun mish-mash of tropes, allowing PCs to ride sandworms while wielding lightsabers and flying starships. But I tend to prefer more ‘realistic’ games, ones that require as little suspension of disbelief as possible. And while Traveller’s default assumptions aren’t diamond-hard, they also aren’t science fantasy, either. There’s a lot of lip-service paid to self-consistency and a modicum of realism. So I still have a hard time with a setting that’s more than a thousand years old, has FTL and antigravity, and still hasn’t finished a decent stellar mapping program.

Which leads me to another of GDW’s exploration-style campaigns: Bayern. This is a nifty adventure module for the 2300AD (or Traveller 2300, whichever) game. Bayern is about a multi-year voyage to the Pleiades. The Pleiades are a totally real celestial object (and very nice to look at — check them out in binoculars sometime, if you haven’t already), and a very interesting goal for a stellar exploration mission. There are still some odd tensions, such as: Why would the ship ever go explore anything at all other than the Pleiades, if that is their ultimate goal (and they have a very strong reason to want to get to the Pleiades as soon as humanly possible — no spoilers)? Side-quests don’t make a lot of sense when you’ve got a really good reason to finish the main quest right away. Also, there are some odd design choices, such as having a press corps onboard the ship who are motivated to investigate everything but have basically no sway in doing so.

Journalist: “Captain, you’ve decided to take the ship on a multi-light-year detour, even though the mission clearly states we need to get to the Pleiades with no further delay. What do you have to say?”

Captain: “I say that the next journalist who asks me a question gets thrown out the airlock.”

Journalist: “In other news today, there are cherry tomatoes in the mess hall again…”

But the overall mission is a very compelling one. A very tempting one, really. If I were to run a prepackaged adventure or campaign as written, Bayern is very close to the top of the list. 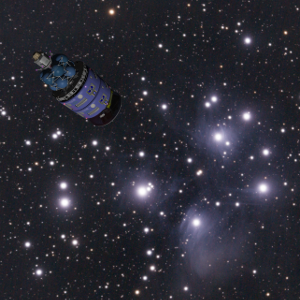 What does Bayern have that the Scout Service doesn’t? Primarily, it has a sense of exploring places that are truly new. In the 2300AD setting, humanity has ‘only’ explored out to about 50 light-years from Earth. The mission to the Pleiades is a real stretch, many times further away than any person has ever gone. The Imperial Scout Service, by contrast, is ‘exploring’ places that have been visited a gazillion times already for centuries. It’s unlikely that the Bayern is going to find any planets, much less any star systems, that they don’t already know all the basic parameters of; but there will definitely be new situations, never before encountered by any human.

“Before we left Earth orbit, we already knew this gas giant would be orbiting at 0.3 AU from the primary and that it was rich in carbon; but we couldn’t have realized until we got here that the carbon was in the form of a ring of naturally-occurring carbon monofilaments, just above the cloud-tops…”

That’s what makes the Bayern’s exploring so much more appealing to me than the Scout Service’s: There’s a sense of newness. Of actually seeing things no one has ever seen before.

That’s a big part of RPG gaming for a lot of us, I think. Being able to explore things that no person has ever seen before is really evocative and fun. It can even work if it’s just exploring something that no one has seen in centuries (but for me, if the Scout Service is ‘exploring’ systems that must’ve been visited in the last decade or two at the outset, that still doesn’t work).

This gets at one of the biggest advantages in running fantasy games. A huge difference between fantasy and SF is that SF tends toward an information-dense environment. Or perhaps I should say, an answer-rich environment. How does this plant fit into the ecosystem? What’s in that cave? How long has this structure been sitting here, and who made it? In fantasy, finding each answer is an adventure in itself, or maybe outright impossible. In SF, technology makes finding the answers much, much easier. Clearly, there are still mysteries, and especially important answers are usually that much more difficult to achieve. But still, considerably easier than in fantasy. Obviously, no hard and fast distinction between fantasy and SF is ever going to be very accurate, but one of the biggest tendencies is this: SF tends to make finding the answers a lot easier, and then deals with what the answers mean; while fantasy thrives on the mystery. (And horror, going even further along this continuum, tends to say “trust me, you don’t even want to know the answers.”)

Also, in fantasy, information tends to propagate much more slowly. “What’s life generally like on that other continent?” is the question of a lifetime in most fantasy worlds, but if you’ve got access to modern technology or better, it’s answered with a quick internet search.

So fantasy games make it much, much easier to feel like the PCs are the first ones to experience something. In an SF game, you have to work pretty hard for there to be real mystery. Add a sector full of ion storms, so no one’s ever been able to return from it; throttle the FTL, so that humanity is restricted to a small sphere within the larger setting; say that humanity is just getting back to FTL, after a long period of technological collapse (or put your setting at the beginning of the FTL age); focus on a colony ship with decaying infrastructure and limited ways of learning about the outside world — there are lots of ways to add that bit of exploring mystery to an FTL setting. But it still takes work. I think that’s one of the main reasons why fantasy tends to be more popular in gaming than SF: fantasy makes it easier to create mystery.

It’s also important to think about the motivation for exploring in the first place — the desire to be the First or the Only to find/see/do/experience something — and how that can lead in a lot of bad directions, including colonialism, imperialism, and erasing the existence of people who were already there. But that’s a slightly different issue, and maybe one for a later post.