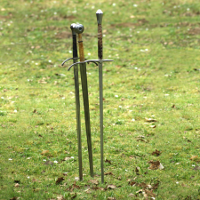 I included Fighting Styles in the rules because it seemed like a neat mechanic, and a nice way to get those kind of “I find that Thibault cancels out Capoferro” and “Aha, I see you studied with Heren of Lestul; Heren was always one of my poorest students”-kinds of moments. But in my experience, players don’t often seem to choose Fighting Styles for characters. This might be lack of me emphasizing their existence at character generation, or it might be insufficient clarity about how Fighting Styles work. It might also be that Fighting Styles don’t have enough mechanical benefit. I’m not sure.

This could potentially be overpowering, though; who cares what your stance is when you can get a constant +4? And that kind of lacks flavor. So I think that, with these higher-powered Fighting Styles, there should still be some limits on how those modifiers get used. How about set splits between offensive and defensive, per Style? So, say, Sirikanian Sword and Shield might be more defensive, while Rhodian Fencing is more offensive. This could require extensively detailing how the modifiers must be split on a per-skill level basis, but an easier way to do it could be just specifying broad categories:

“More” here means that the modifier has to be split with a greater portion on that side. Thus, if we say that Sirikanian Sword and Shield is more defensive, then someone who knows it to skill level 4 would have to split the modifier either as +3 defense/+1 offense or +4 defense/+0 offense. I think this would also have to indicate that an exactly even split could be allowed, though, or people with skill 2 in Sirikanian Sword and Shield, for example, would always have to go +2 defense/+0 offense because that’s the only way to split the modifier with more on the defensive side. As always, this should be about increasing interesting choices, so split modifiers should still leave the player with meaningful, fun choices to make.

Would this cause fighting styles to become overpowered? How would it mesh with stances? Playtesting may be required.