When I went to Taiwan in June, I tried to do what I could to support the local gaming scene. When I visited Alchemy on Zhongxiao, I bought what looked like a great game, produced in Taiwan: 美麗島風雲， translated as The Wonderful Island.

It’s a highly satirical game. If you know Taiwan’s politics, the game is pretty much straight up hilarious. It hits a lot of the major stories and personalities of real life: paparazzi recordings, fake polls, overseas bank accounts, gun attacks, media frenzies, court summons slowly accumulating until candidates finally end up in jail — seems like it’s pretty much all there. The different personalities have their own different powers depending on the person: Shi Mingde can win if he is the first person sentenced to jail; Zheng Hongyi can give someone a national scolding; Lü Xiulian needn’t worry about stratagems from male candidates. Even the name and the cover art hint at political meanings: the title of the game alludes to the Gaoxiong Incident, also called the Meilidao Incident, a formative event in the formation of the DPP; and the cover art showing Ma Yingjiu and Chen Shuibian is a visual pun for “deceit” (馬 + 扁 = 騙). I don’t know if I’d recommend playing The Wonderful Island as an introduction to Taiwanese politics, but it will certainly help you learn. And with the presidential election coming up in January, now’s the time to learn.

The Wonderful Island is a partly-hidden identity game. Very consistent with modern Taiwanese politics, your true loyalties are not publicly known. You may actually be in the Green Camp, or the Blue Camp, or just out for #1. Secret meeting cards allow you to scope out your fellow players’ loyalties, but only with vague certainty. It’s also possible for multiple people to win at the same time, since agendas can be very different. Just as it should be.

The production values are very high. The boards are very thick cardstock, the cards are on nice paper, the printing is all very clear. The illustrations by 簡振傑 Rockat, especially, are amazing — beautiful caricatures that are completely recognizable yet completely hilarious. 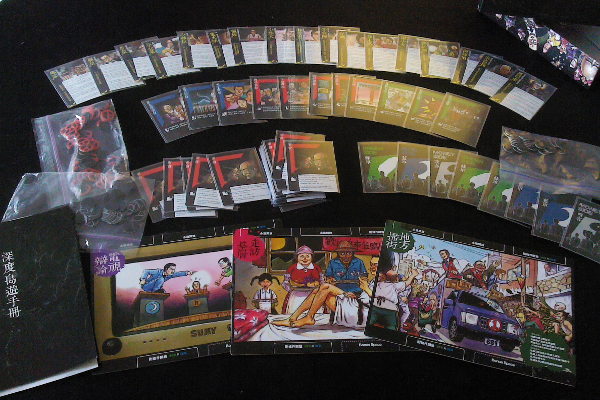 There isn’t an English version, so far as I can tell. The rules are also, um, not the clearest. Specific rules are sometimes hard to find. The language used is very formal, meaning that pronoun references are sometimes a bit unclear. And the game tries to do a pretty thorough simulation of the Taiwanese election process, so there are a fair number of exceptions and edge cases. There are, however, plenty of resources available, including a series of official “how to play” videos (1, 2, 3, 4) and a very helpful fan video. With help from those videos, I was able to dash off enough of a translation to play it last night with the weekly group.

I had already put sleeves on the cards; I don’t usually do that, but this game is going to be a little difficult to get replacement components for, so I want to preserve it well. I printed off some of the translations and inserted them in the card sleeves. This proved not just useful but almost invaluable; I’ll have to do the same with the action cards.

We had a pretty good time. It took about an hour to finish one game, which is consistent with the game’s estimates — pretty good for our first time out. We had a bit of frustration with not having enough useful cards to play, but otherwise, it seemed to go pretty smoothly. Even when one player ended up in jail, they were able to continue exerting influence. (Again, as it should be.) We’re going to play it again next week; and I’m planning to run this at Con of the North next year. Come check it out!