I’ve mentioned Star Traders here before, but it’s high time to do a fuller review. 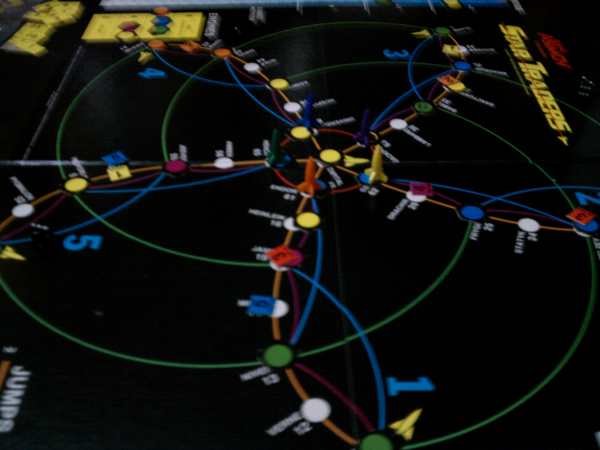 Whatever the name, it’s a pretty wonderful game. It’s fun during play (at least if you’re in the right mindset), and it generates hilarious, convoluted situations that make great stories later on. Read my report on Method Con 2 for a relatively recent example. Another example from the vaults of history: It was the endgame, where someone was almost certainly going to win within the next turn. Two players had their Imperial Cargoes, each worth at least 15 stellors, ready to be delivered. (The average payout for a cargo is about 16, so plenty are worth considerably less.) I had a card that would easily defeat either of their attempts. It wouldn’t win me the game, but it could mess with their plans. So I asked them to bid against each other; I would play the card on whoever lost the bidding. I ended up making something like 150 stellors, the most I’ve ever had at one time in this game. Did I win? No, but I had fun anyway.

You might get the impression that the game is mean-spirited. A lot of the rules are designed to put players into direct competition with each other, and a lot of the actions you can take in the game are messing with your fellow players. You can sometimes compete with other players for contracts, destroy their stations, stick them with a useless cargo or make their hyperdrives go kaput. The game is definitely pretty PVP. But that is, I guess, just the spirit of the game. If you don’t like PVP action, then Star Traders might not be a good game for you.

Even if it involves a lot of PVP, it’s not necessarily mean-spirited. The many things you can do in the game include putting a banana into someone else’s hyperdrive (yes, this is an actual thing in the game), giving someone an Avoid Calamity card in a mutually-beneficial trade or allowing them to use your station out of pure magnanimity. Also, nothing actually requires you to mess with other players, though I think that may make it more difficult to win.

Star Traders has a strong capitalist streak. The basic way to win is through delivering cargo, making deals and earning galactic prestige. And the PVP aspects make it feel like a capitalist’s fantasy of a free market. The useless, obstructive, arbitrary government (in the form of the Emperor and their underlings) add to this feeling that it’s a galaxy viewed through a libertarian lens. But it’s plenty of fun regardless.

For an abstract representation of the galaxy, a bunch of cardboard chits and some pieces of plastic, it has a pretty good amount of flavor. There’s a surprising amount of immersion. The game gives a real sense of expanding your trade empire, with increasing numbers of stations, more powerful engines, rising and falling prestige, etc. The cards all have some sort of flavor reason for working the way they do.

The setting, our galaxy, makes a fair amount of internal sense. (It doesn’t match our current picture of what the galaxy looks like — it’d be interesting to see a reworking of the board to look this way — but it’s definitely a recognizable spiral.) Many of the star systems are named for SF contemporaries of Asimov: Heinlein, Niven, etc. (NB: Be careful not to say the name “Niven” out loud during play, though, or you’re likely to invoke the hyperspace gnomes responsible for thwarting jump attempts.) The system of Bradbury produces dandelion wine; Kluge produces hyperdrives; Shower produces fungus; and the backwater system of Terra only produces tourists. (Someone was having fun there.) It all hangs together, in an enjoyably goofy way.

The whole flavor of the game also hangs together with its basic premise:

In the year 3250, the Galactic Empire is at peace. Mankind’s heroes are not warriors – they’re the daring Traders who journey between the stars. With your trusty hyperdrive ship, you are a Star Trader. You will build trading stations on alien worlds, and race the other Traders to be the first to deliver cargoes from planet to planet. Your goal: to earn great wealth — and please the almighty Emperor — until you can earn the title of Imperial Trader!

Galactic-scale trade doesn’t make much sense, of course (see Greg Costikyan’s “The 11 Billion Dollar Bottle of Wine: The Possibilities of Interstellar Trade” in the aforementioned Ares Magazine #12, or on his website, for more on this). But given the conceit of cheap, fast intra-galactic travel, it makes a fair amount of sense, and the rules do a good job of evoking the setting. Many boardgames feel like the mechanics were designed first, then the flavor elements were bolted on later — sometimes poorly. But Star Traders was clearly designed with trading in mind from the start. Some of the mechanics are a little clunky, or even poorly spelled out, as a result. But like I said, the flavor of it is quite coherent. Playing it, you really do feel like you’re building a galactic trading empire.

For that reason, I would also classify it as a pseudo-RPG. Adding to this is the fact that every player gets a different personality: the Psychic, the Navigator, the Insider, etc. The abilities — and thus, the choices — available to the Navigator are significantly different from the choices available to the Psychic, and to the other personalities. This adds to the immersiveness of the game, which is again amazing for such an abstract representation of an entire galaxy. And the personalities add a lot of replay value.

Another thing that adds to the pseudo-RPG feel is the fact that players can make deals about anything. Want someone to give you the right to use their stations any time you roll a 4 or better on a jump attempt? Totally acceptable within the rules. How about borrowing 10 stellors from someone, on the promise that you’ll pay them back 11 stellors next time you land on one of their stations — and then deliberately avoiding their stations for the rest of the game? Also totally plausible. The open-ended nature of the deal-making means that you’re negotiating with your fellow players, allowing for human-scale levels of complexity and nuance, and lending the game that much more depth and subtlety. And adding to the feel that you’re really a space star merchant trader.

Second, and a bigger deal, is that the rules as written need some errata. I pretty firmly believe that the groups I play this with have done more playtesting than SJG ever did with it. For example, the rules state repeatedly that doing something “ends your turn”, when they clearly mean that doing this ends your movement. This is a very important difference! Someone who had read the rules through casually might well cause themself a huge amount of frustration by trying to play the rules as written.

Another example of the errata needed: when you petition the Emperor, some higher die results are plainly worse than lower die results. In almost the entire game, you want to roll high; and most of the time when petitioning, you also want to roll high. But if you roll one particular way, you actually want to roll low. And your current Prestige gives you a positive modifier to your die roll. Do you have to take the modifier? The rules don’t clarify this, even though they prompt the question.

Read the annotated version of the rulebook on Matt’s Star Traders website for ways in which our playtesting has revealed more edge cases. We eventually discovered that we needed an entire new mechanic to sort out one particular kind of edge case! Playing Star Traders has sometimes made me feel like a constitutional scholar.

When we aren’t arguing about the rules of the game, the groups I play Star Traders with are enjoying it in other silly ways. If you play Star Traders, I recommend getting into the right mindset. Here are some ways to help yourself get into that mindset:

All in all, Star Traders is a pretty wonderful game — well worth playing if you ever get the chance.

It’s also thoroughly out of print. The game is usually available on eBay or Noble Knight, though the prices aren’t always great — seems this game is still in a fair amount of demand. But who knows? Several of my friends and I got our copies on eBay for about US$5.00 — someone had apparently opened a storage locker of Star Traders. Maybe it’ll happen again! Or maybe someone will swoop down from the stars and offer you a set in exchange for removing a banana from their hyperdrive.

Took a while to finish this; I wanted to cover everything in a single post.