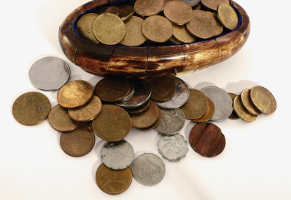 The ancient and possibly mythical hero Aros did many wonderful deeds in the Kreshar region of Morensia. Among these, he gave his last coin to a poor woman in the village of Arosart. When she bought a loaf of bread with the coin and returned home, she found that the coin had returned to her purse. She continued spending the coin and every time, it returned. Even better, when the people of the village spent the coins she had given them, those coins, too, returned to their purses.

At present, no one knows where the Coins are. There are stories that the Coins are buried somewhere in the hills near Arosart (which have become fairly well-pocked with the pits of treasure hunters over the years). Other tales say that the Coins gradually disappeared, until only the last one remained in the hands of the widow, who returned it to Aros. As he walked out of the village, the Coin dropped out of his purse and was lost. Occasional treasure-seekers come to the village looking for the fabled Coins, but none have ever found them. The villagers like to say that the ghosts of the Mountain People jealously guard the Coin’s (Coins’?) resting place.

A more likely explanation is that the Coins were a metaphor for the nearby mines. The village found silver in the hills, and gradually became richer from the silver, until eventually the vein was tapped out and the village was left contentedly prosperous. Well, anything’s possible.