This past weekend was Method Con 2, this year’s MnStf fall relaxacon. As usual, it was a pleasant weekend of conversation, gaming, food and generally hanging out with a bunch of cool people. 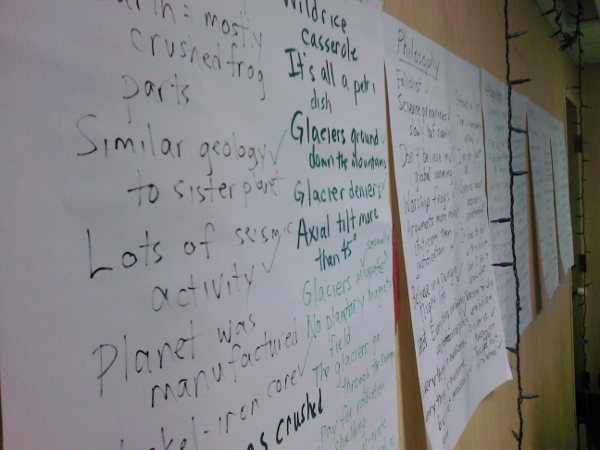 Let’s Build a World: In the same mode as I’ve done several times now, this was collaborative worldbuilding in the span of 75 minutes. We started with a few elements of atmosphere: Methane, Oxygen, permafog… oh, and perma-frog, too. It is permanently raining amphibians on this world. The mood was also set as ‘skeptical’. A common sentiment on this world is “That is awesomely wrong“.

I was again fascinated by the tendency towards goofiness here. The geology (seen above) was pretty straight: a nickel-iron core, a very old planet, the mountains were ground down by glaciers, the mountains were not crushed by frogs, etc. Yet there was, overall, a lot of gonzo detail, such as constant background music, the people being furry and yellow, and the volcanoes erupting green lava in time with the music. I continue to be interested in how this game tends towards gonzo.

Star Traders: We managed to get together a game of this, which was nice — we haven’t had enough lately, due to the main players being in different cities. The game was full of wild deals, hilarious laughter and memorable moments. I had to write one down:

Star Traders generates this kind of convoluted silliness quite naturally. That’s the main reason a lot of my friends like to play it. We discover new bizarre situations and make new tangled deals every time we play. It has a lot of the wonderful narrative possibility of tabletop RPGs. In many ways, in fact, it is an RPG.

The game is also part of an interesting group of games: those that include the entire universe as a subset of themselves. It is possible to make deals for anything in Star Traders: “Let me use your station and I’ll go get you some potato chips”, for example. This is not an especially strong inclusion of the entire universe, unlike other games, but it’s still in there.

Another thing I’ve noticed about Star Traders: the endgame is largely about who can outlast everyone else’s Calamity cards. And when we play it as inadvisably late as we did Friday night, it’s also about who can stay coherent the best with the least sleep. In two different ways, then, it’s a game of endurance as much as anything else.

Moneyduck: We had a few rounds of this Saturday night. This is another goofiness engine. Tons of hilarious NSFW comedy came out of this.

Blockhead: The last game Saturday night. This is about balancing things on top of other things, in the same general class as Jenga or Pick-Up Sticks. So, not a lot of intellectual stimulation, but a good game for playing late at night.

This is another example of games that contain the entire universe as a subset of themselves, in that you can use “any object on the table” to help set up the structure. We used a Kit-Kat wrapper and parts of a Sudoku-like puzzle as Blockhead pieces.

Timeline: I’ve reviewed this before. We played the Inventions version and again got into disagreements with the game about when a given thing was invented. Would you, for example, say that the water clock is more ancient than the sundial? The game does. Not sure I agree there — surely, the sundial is as old as the first time someone stuck a stick in the dirt and used that to tell what time of day it was. Still, the game was enjoyable and a good way to pass 20 minutes or so.

PDQ:A fast-playing word game that I hadn’t played before. Three cards are revealed; each has a letter of the alphabet on it. Everyone seated at the table tries to come up with a word that uses all three letters, in order. Longest word wins ties. It was pretty fun and got us saying some very weird words quite loudly.

Roll Through the Ages: This is, as I’ve described it before, a combination of Yahtzee and Civilization. It’s a fun little game that gets the flavor of a historical simulation while being pretty fast. It has a very well-designed record sheet that includes nearly all the rules, and it plays quite well solo. Our game ended up being very close: the victory point totals were 21, 20 & 15. (An interesting aside: the scores vary widely depending on the number of players in the game. In my experience, the total points scored equal ~60 points; and if you’re playing solo and you don’t get more than 50 points, you haven’t ‘won’.)

Seasons: I only played a little bit of this before I had to run off to dinner. It gets compared to Magic: the Gathering, and with good reason; it’s very much about collecting magical power and trying to cast spells. But the goal is victory points, not killing your opponent, and there are some interesting effects related to advancing the turn (year & season) track. It was pretty confusing, due to not having enough time to really learn the rules and due to some poor editing, but I’d definitely like to play it again when I get a chance.

We also played a game of my own devising that I still haven’t worked up the gumption to describe fully online. I will say, though, that it is the game that pushed Blade & Crown’s product number up to 3002.

JOFCon: This convention got announced at Method Con’s closing ceremonies. It promises to be both stimulating and relaxing: it’ll still be a relaxacon, but there will be a track of programming about running conventions that I think will be extremely important. I’m hoping to help arrange a training for JOFCon on how to recognize and reduce harassment at cons.

Food: There was a bunch of great food, including catered Indian food Saturday night, good Chinese food Sunday night and generally tasty stuff the rest of the time.

Conversations: As always, a major part of a con is just the conversations we have with friends and other fans. Lots of personal stuff here, nothing worth saying on this blog. But all well worth saying.