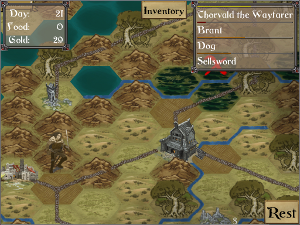 Through a thread on Story Games, I found out about a nifty game app available for iOS or Android: Road of Kings.

It’s a sort of hexcrawl, where you’re out to prove your worth as a barbarian chief by accumulating 500 gold in 100 days. Doing so will mean exploring ruins, fighting bandits and other heroic escapades. It will also mean trying to manage followers, choosing when to have an army in train (and keep them fed and healthy), or when to go it alone. The setting is fairly generic fantasy, with serpent cults, evil castle lords, scary ruins, mercenary sellswords, lurking giant spiders and the like.

An aside: Barbarian Prince was designed by Arnold Hendrick. He also designed Darklands — easily the best CRPG ever — and had a hand in designing Swordbearer, one of my favorite RPGs ever. Hendrick deservedly gets a shout-out in the credits of Road of Kings.

Road of Kings seems heavily inspired by the Dwarfstar microgame Barbarian Prince. (And in case you didn’t know, those Dwarfstar links are to a site where you can download the files for the games, completely legally, to print and play yourself. Check ’em out!) It also bears more than a passing resemblance to the Middle Earth Quest books, at least the hex-based ones like Night of the Nazgûl and Rescue in Mirkwood.

Road of Kings is a great little game. A full playthrough can take a few minutes, perhaps 15. There’s a good variety of things to do, so even though it’s all pre-programmed (as all CRPGs must be), it doesn’t feel too repetitious.

There are some problems: the game has crashed on me a couple different ways now; scores don’t seem to consistently propagate from session to session; many of the special attacks don’t seem to work; and unlocked starting cities also don’t persist from session to session. Once you’ve KO’ed your enemies in a fight, it’s impossible to end the fight without killing them. It might be nice to have a randomly generated map to add replayability. Also, it would be very nice if there was a choice of gender for the main character.

Still, it’s a lot of fun! It’s very engrossing — playing one game (which took about five minutes) made me want to play several more, and the stories are very flavorful. A great casual fantasy CRPG, and totally worth the $0.99.