Sunday’s last game was John’s Fate of Ringworld. There was a pretty brief introduction to the setting — not much needed, because we were all at least mostly familiar with Niven’s Ringworld — then character generation. John had added two intelligent species to the base setting: one a heavily augmented species who is able and willing to clone itself; and one a hive mind, Shoggoth-like species. Both were interesting, authentically alien and added to the feeling of realism, I think. (It seems to me that there’s a slight tendency in Niven’s worldbuilding towards stereotype.) I ended up playing a character from that clone-using species; her Trouble was “Life is more fun with no backup”.

We had a long approach to the Ringworld in our General Products spherical-hull starship. There was a lot of discussion of how to deal with the Ringworld’s defenses, which seemed to be tracking us, and of another high energy-signature ship that seemed to be a) friendly with the locals and b) hostile to us. We eventually decided on a course that brought us careening along the edge of the Ringworld, then up through a giant hole in the scrith that had been punched by some ancient moon. (Think Mount Fuji, except it’s a dozen times taller, and hollow.)

Then we… um… landed. Or… maybe that’s not the best word for it. Our pilot made a rather poor roll, so the black line is our actual course: 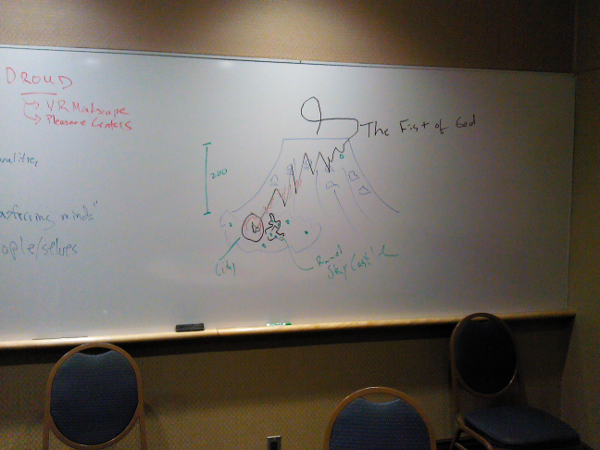 Imagine a bouncy ball bounding down the side of a mountain. We only finally skidded to a stop, then promptly set fire to the surrounding community. It was pretty memorable.

After that, we scouted out the local civilization. We discovered that they had a floating city, with some impressive ancient technology that they’d forgotten how to operate. And then we were about out of time.

It was a fun session, and a great one to end the con on.