After Artemis, I ended up going to dinner with John and Chad — it’d been a very long time since I’d seen Chad, so the chance to catch up was irresistible. We shared a pizza and chatted about work and life. Then, nursing a possible cold, I went home for the night. I usually try to stay for every possible minute of Con of the North, but I wanted to be healthy more. Similarly, I slept in Sunday morning because I wanted to minimize my symptoms.

Sunday’s first game ended up being my Microscope session that started at 2pm. As I’ve discussed before, I find it somewhat challenging to run Microscope, even with good friends, because there’s so much shared narrative control that it’s easy for the game to veer wildly in terms of flavor. And I’d heard bad reports about a Microscope run at CotN last year, largely because the players were unable to agree precisely on tone and flavor beforehand.

Still, I wanted to run Microscope at Con of the North because 1) it seemed like a worthwhile experiment to try to get a group of relative strangers to agree on standards, and 2) I just really like Microscope.

So I started out telling everyone the basics of the rules. I should probably buy a print copy of the rules sometime, because flipping back and forth through my PDF copy is still a little too cumbersome.

One nice advantage of the room we were in — one I hadn’t used in either of the two other games I ran there — was a giant whiteboard. We ended up using it to list our overall theme, our Palette, our Focii and a cheatsheet of what Periods, Events and Scenes look like. We came up with a pretty interesting Palette: 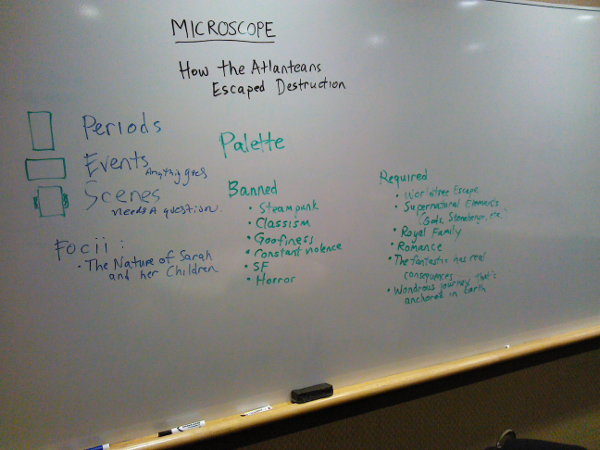 Discussing the Palette was interesting but difficult, because we ended up having to discuss our genre preferences, right down to definitions. Have you ever tried to hammer out an agreement with a half-dozen strangers as to what constitutes “fantasy”, all within a half-hour or so? It was challenging, fascinating and probably rewarding.

There continued to be confusion throughout the game as to what constitutes a Period, an Event and a Scene — I probably didn’t introduce those as well as I could’ve. But then, people were also just getting used to a new game. (I don’t think anyone other than me had played Microscope before.)

Someone in the group came with the basic story: “How the Atlanteans escaped destruction”. There was pretty extensive discussion of how Atlantis would be destroyed. It was funny, because without knowing it, the group had presaged the section of the rules titled “Nuking Atlantis”.

There ended up being some social contract issues, as one player felt like their contributions to one scene were ignored, and we had some fairly intense discussions about this. It gave me more food for thought.

There were at least a couple scenes where the choice of characters almost gave the answer to the question before the scene started. In one scene, the question was how the World Tree was made to pull up its roots and enter the Realm of Shadow. My character was a very nervous, not-especially-competent wizard, worried about how she’d perform the nearly-forgotten ritual to move the Tree… question almost already solved. But of course it was much more complex than that.

There was some great roleplaying all around, really, with some very evocative characters that I now can’t describe very well. I remember having lots of fun bouncing things back and forth between my not-so-competent wizard and another player’s much more competent servant to my wizard.

Another fairly intense bit of roleplaying centered on racism. There was a member of an oppressed minority, the Tritons, who was given access to the rather racist discussions of the ruling classes by a ghost. It was a very nifty bit of narrative improvisation; the players playing the Triton, the ruling class Atlantean and the ghost could, I think, all see where each other was going. Eventually it was revealed that the Atlantean was part Triton and their racist worldview started to collapse. It had an especially intense dimension in that the person playing the Atlantean is African American, while the other two are white. Some very good roleplaying going on there, I think, and hopefully no toes stepped on.

All in all, it was pretty intense, with lots of memorable moments — a rewarding experiment.