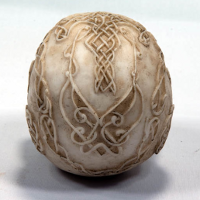 For an enchanted item to have amazing powers is fun. But at least as much fun can be discovering the history of the object. Finding out that your sword makes a high-pitched keening sound when you’re near water is neat, but discovering that it makes that sound because the first owner was a blind fire elemental can be just as interesting.

With that in mind, here are some ideas for item provenance: