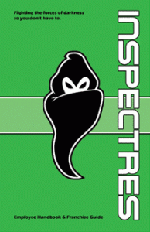 For a few years now, I’ve been trying to get into one of the InSpectres sessions that Heather runs. I’ve heard a lot about how fun they are, and I’ve been determined to see for myself. But it has seemed that, every year, something has prevented it: I only got an alternate ticket, or the game was before I could practically get to the con, or opposite a game I was running, or something else. This year, I nearly didn’t register for InSpectres; there was a Microscope game running in the same slot, and it was hard to decide. But in the end, I thought I needed to try again for InSpectres, out of a sense of historical commitment if nothing else.

Heather started us off by giving a pretty good explanation of the game, though (I’d say) not a perfect one; I didn’t quite get what level of goofiness/gonzoness was appropriate to the game. Ghostbusters, which InSpectes is pretty heavily based on, includes ghost traps, proton accelerators, statue-engulfing masses of pink goo and Babylonian deities powerful enough to change the minds of New York architects. Was that level of cinematic action appropriate? Or was it all more like in Scooby Doo where anything seemingly supernatural turned out to be some guy with a fog machine? It was equally difficult to tell what tone we were aiming for: cartoonish where anything goes as long as it’s funny, or something more like a cynical take on a reality TV show? All this took me a while to get a grip on, and I don’t think I’d really gotten a thoroughgoing grip on it by the end of the game. A good deal of the action results are player-narrated, which made it more difficult to know what I could or couldn’t do. I was accordingly somewhat reserved in my roleplaying.

But it turned out to be a lot of fun anyway. Scenario design in InSpectres seems to be about as complicated in that for Og; it appeared that the entirety of Heather’s scenario design was “there’s a pool full of pink goo in a fitness center”. (There was other prep, though: making character sheets, making nametags, etc.) The vast majority of the plot was driven by us players. Some of what happened:

There were tons of quotable moments:

We had a semi-animate semi-NPC join the party, in the form of a towel that’d started dancing after being immersed in the pink goo. After a trip to the bathroom, I brought in a clean hotel towel and we quickly filled out its nametag: “Towely”. It became a sort of mascot for the group.

In the end, it was a great deal of goofy fun. We barely used the confessional narrative mechanic, because the game mostly turned out to follow the rule of “if it’s funny, it flies”.

Still, though, I couldn’t help but try to find out how the nearby Microscope game was going. I popped in and checked with the GM. He said that the game had gone okay, but not great; there’d been a wide range of player ages in the game, and a wide divergence in expectations for how the game would go. The tone of the history was therefore pretty scattered. So, in the end, it looks like my choice to play InSpectres was right in more ways than one.