This year’s Con of the North is February 15-17 — just a few weeks away! At the Con, I’ll be running two Blade & Crown events:

Honor among thieves? Well, we all stick together, and old man Karna kept his word when he said he’d tell us where the missing treasure was before he died. Now to deal with the ghosts and nobles standing between us and the treasure…

Hayao Miyazaki’s Valley of the Sands

When the Great Insects came, the Queen in the Valley of Sands asked us to root out the cause. Now, we venture beyond the lands of the Periphery, into the Sea of Corruption itself, to save our home. 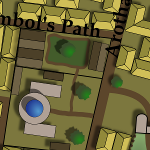 Part of the town where Karna’s Cache takes place

If you’ve been wanting to try Blade & Crown, this is your chance! Both games should be great. I’ve already run something of a prequel to Karna’s Cache for my weekly group, and they had a lot of fun with it. (Though there was that rather unfortunate incident involving a crossbow and a messenger.)

Both are in the House of Indie Games, where many wonderful games will be on offer. Come hang out and play some nifty games with us!