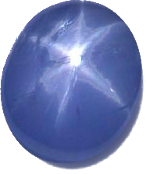 It glints and sparkles

At some point in their travels, the PCs find a silvery ring with a single hemispherical star sapphire mounted in it. The star seems to dance and shift depending on the angle it’s viewed at. The metal of the ring looks like silver, but it has a higher luster.

Later in the travels, the PCs come upon a domed room with a single statue in the middle. The dome appears to be made of black stone, with very little gloss. It could almost be ancient iron, except that it is perfectly smooth. The statue is of a queen, sitting atop an armored horse, and holding out her hand and pointing at some indistinct part of the dome. A PC who knows their directions (in Blade & Crown terms, a successful skill check against Navigation) will notice that she is pointing exactly at the south pole in the sky.

The PCs might think to look at her pointer finger. It is unadorned, and sculpted in the same dramatic way the rest of the statue was carved. The PCs might also think to put the sapphire ring on her finger. If they put it on in just the right position, the ring will glow slightly and the inner surface of the dome will come alive with a projection of the night sky.